In Your Dreams: A Conversation With Stevie Nicks 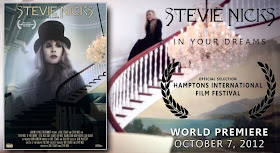 Mike Ragogna: Stevie, how are you?

Stevie Nicks: Good, how are you?


MR: Pretty good, thanks. Stevie, you have a new documentary that's going to be premiering on October 7th at Hamptons International Film Festival. The name of you new documentary with Dave Stewart is In Your Dreams, that title also having been the name of the last album. Obviously  this was an important album for you.

SN: This was an important album. This was an album that I probably was never going to make, because after I did Trouble in Shangri-La that came out in 2001, I went out on the road with Fleetwood Mac for a couple of years and then in 2005, I was going to make a record. I came off the road with Fleetwood Mac and that's kind of what I've always done. I do my whole thing with Fleetwood Mac, and it was like a year and a half for Say You Will, and then I was going to make a record. I really got very depressed feedback from everyone in the business around me, which was like, "You know what, the business is so screwed up that really, right now, you just shouldn't bother." It wasn't just my manager, it was everybody. It was like I'd tripped and fallen down the stairs. It was a really bad moment in my life, and I said, "Okay." That's really not like me, but with the whole internet piracy and everything, I don't have a computer, I didn't have one then, but I knew that was coming ten years ago. I knew that that was going to start to destroy the music business, and I was like, "Oh, my God, it's happening, it's even happening to me."

MR: Let's get further into In Your Dreams. On camera, you appear fluid, informed, and very comfortable. You're very at ease here.

SN: Yes. You know what, I have been a little performer since I was four years old, and you're going to see that in this film. I was just nuts for the stage. I came into the world dancing and singing, and my mom and dad, I think, knew from the very beginning. My grandfather was a country-western singer and a fiddle player and guitarist, and he wrote songs and traveled all over the United States and played gigs in the forties. My parents were very supportive of my love of music and my focus was very strong from when I was in grade school. They knew I didn't want to be an actress, I didn't want to take drama, I didn't really want to take musical drama. I just wanted to listen to rockabilly and rock 'n' roll and R&B, and I just was in my own little musical world. I had it planned out. In sixth grade, I was wearing a black outfit with a top hat. I had it all planned out.

MR: Stevie, any more reflections on the documentary?

SN: I tell people that Dave created a magical sandbox for me and my singers to play in and that he became The Mad Hatter and this walk through ten months in my house is like going into Alice In Wonderland's world. You really get to experience making this record. Anybody who loves music, wants to be in music, is a singer, is a writer, used to be a singer or a writer, is ninety years old and wishes they were still young enough to be a singer and a writer, it's like you come into my world and it's very, very special. I'm so proud of this that my real prayer for this film is that when people see this--because they get to see a little bit and hear a little bit of the finished product of each song, not a lot--but what I'm hoping is that in this world of "We don't need to buy a whole concept record," that they see this film and they go, "I really need to hear this record!"

MR: Nice. And again, it's debuting at the Hamptons International Film Festival on October 7th.


MR: I also want to congratulate you on your song "Soldier's Angel." It's still very touching and I love that you are still with the Band Of Soldiers charity. You've contributed to our soldiers' lives as well as the culture in beautiful ways.

SN: Well, thank you. I think that "Soldier's Angel" is probably the song off of this record that will live on forever because it does sort of capture a moment in time through Iraq and Afghanistan and everything that's going on now. These wars aren't over and these kids are coming back and they're so wounded and they're never going to be the same and people should try to remember that and try to take care of these guys because once they leave the hospitals, they're on their own. When you actually sit on the bed of one of these injured soldiers, you're like, "Oh my God, what can I do to help?" and I tell everybody every night, you need to send in five bucks a month. Do whatever you can.

MR: All right, Stevie, I really appreciate your time. Thank you so much.

SN: You too, and hopefully I'll see you soon.