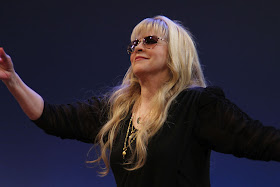 STEVIE NICKS WAS on the road — as usual — being driven to the Hamptons Film Festival for last Sunday's world premiere of "In Your Dreams," her self-produced documentary chronicling the year she spent recording her latest solo album — her first in a decade — with the Eurythmics' Dave Stewart.

Talking on her cellphone as she rolled through Long Island, she confessed, "I'm really nervous about it. I've seen the film a hundred times because I've been editing it since last February. But, honestly, this is my first time delving into anything involving film. In the '80s, we made a lot of videos, but that's as filmesque as I've ever been. I know so little about all of this. I've never been to a film festival before in my life."

She didn't take long to get the hang of it. After the premiere, the 64-year-old rock hall of famer treated the audience in Sag Harbor's Bay Street Theater to an impromptu medley that included 1981's "Bella Donna," the title track of an album that's sold more than 8 million copies and earned her the title of "the reigning queen of rock 'n' roll" from Rolling Stone magazine.

We can only hope she feels that inspired when she's here for Friday's 6:30 p.m. screening of "In Your Dreams" at the Mill Valley Film Festival.

"San Francisco is kind of like my second hometown," she told me in a voice that is surprisingly deep. "I lived there and started playing in aband from 1968 to 1971, so I really feel like I'm coming home."
Nicks met schoolmate Lindsey Buckingham during her senior year at Menlo Atherton High School on the peninsula. He was playing "California Dreamin'" at a party, she began harmonizing with him, and thus began one of the most enduring and tempestuous relationships in rock.

Two years later, he invited her to join him in Fritz, a band that was popular enough in the Bay Area in those days to open for Jimi Hendrix, Janis Joplin and the other groups that created the San Francisco Sound.

"We happened to live in San Francisco during the greatest music period of all time, from 1966 to 1971," she told me. "We opened all those amazing shows at the Fillmore and the Avalon and Winterland. That was one of those accidentally-we-fell-upon it times in our lives."


Wearing her feather boas, furs and oversized glasses, Joplin had a flamboyant stage persona that Nicks would later interpret in her own mystical way, creating an ethereal visual style — diaphanous skirts and shawls, platform boots, layers of leather and lace.

"We opened for Janis two, maybe three times," she recalled. "When you're in the band that opens up, the perk is that you get to sit on the side of the stage and watch the headlining act. What I walked away with from watching her was huge. You don't want to be Janis Joplin, but you certainly pick up the things she did that you love and carry them into your own thing. San Francisco made Lindsey and I who we are. That's where we learned how to be rock 'n' roll' stars."
With that experience behind them, when she and Buckingham joined Fleetwood Mac in 1975, they were ready for the big time.

"Lindsey and I had learned our craft in San Francisco," she explained. "That's why it was so easy for us to walk onstage with Fleetwood Mac 1975."

Nicks' impact on the formerly British band was immediate. Fleetwood Mac's eponymous 1975 album was a commercial and critical success, thanks largely to her song "Rhiannon," voted by Rolling Stone as one of the 500 greatest songs of all time. She also contributed "Landslide," another much-covered classic.

The band was flying high when it holed up in Sausalito's Record Plant to record "Rumours," the 1978 album of the year. It's sold 40 million copies on the strength of four Top 10 singles, including Nicks' song "Dreams," the band's first and only No. 1 hit.

In "Making Rumours: The Inside Story of the Classic Fleetwood Mac Album," producer Ken Caillat reveals the drama around the band then, the creative differences, infidelity, divorce, drugs, alcohol and hard partying that the group somehow managed to survive. Despite that chaotic history, Nicks has pleasant memories of that crazy period.

"We were in Sausalito for about four months," she recalled. "That was one of the best times I can remember. Being in Sausalito every day and being able to sit in restaurants and look across the bay at San Francisco and drink Irish coffee and laugh and kid around and then go to work in this beautiful studio was so much fun. We have great memories of Sausalito."

Nicks, who has recovered from addiction to cocaine and the prescription drug Klonopin, has eight acclaimed solo albums to her credit. The new one, "In Your Dreams," was recorded in the mansion she owns in Pacific Palisades that is featured so prominently in the documentary. She bought the place in 2005, but lives most of the time with her dog in a nearby one-bedroom apartment overlooking the ocean.

"The house became one of the characters in the film," she said. "In San Francisco in the '60s we would have said, 'This is a happening.' It was like a trip without the acid. Everybody who would come over would just want to be there. We were like rolling stones that were gathering moss."

One of the guests was Buckingham, who played acoustic guitar and sang background vocals on the recording of "Soldier Song," a track inspired by the volunteer work Nicks has done with wounded veterans at Walter Reed Hospital.

"You could see him relax and start having a great time," she remembered. "He didn't feel like he was in any kind of competition (with Dave Stewart). But since the beginning, Lindsey and I never really agreed on anything, but that's just who we are. If we had felt exactly the same, I don't think we would have made a good duo. We're always going to be Lindsey and Stevie. It was the same when we were 16 and 17 as it is now that we're 63 and 64. We're exactly the same people."

Nicks is at the end of a summerlong tour behind the "In Your Dreams" album. The Rafael Film Center screening of the 101-minute documentary about the making of the record will be its West Coast premiere. On Oct. 27, she stars in "A Bewitching Evening with Stevie Nicks," a Halloween street party benefit for the revamping of A.C.T.'s Strand Theatre (www.act-sf.org).

Nicks looks back on the year she spent making the record and the film as the best of her life. "When everybody left, I sat on the stairs, put my head in my hands and cried," she recalled. "I really didn't want it to end."

But she's knows it's time to look ahead. She will rejoin Fleetwood Mac in February for yet another tour.

"At some point you have to move on," she said. "And Fleetwood Mac, they're waiting. We'll probably tour all next year. And then I'll go back to my own world the year after next. That's the future."