Buckingham is back, absent Mac 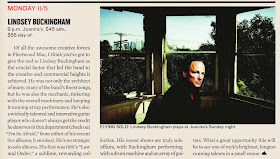 
Lindsey Buckingham has found success in a duo and a group, and is getting the same results as a solo act. Well, maybe not exactly the same, crowd size-wise, but in terms of personal satisfaction, he would say so.

The 63-year-old California-born guitarist-singer-songwriter joined the Rock and Roll Hall of Fame in 1998 as a part of Fleetwood Mac, a group he helped move from cult status to superstars when he and then girlfriend  Stevie Nicks, became members in 1975, two years after the couple put out an album under their two last names.

With Buckingham and Nicks in the band, Fleetwood Mac became the most commercially successful group of the 1970s. The band’s self-titled album of 1975 sold more than 5 million copies, thanks to the songs “Rhiannon,” “Over My Head,” “Say You Love Me” and “Landslide.” Its 1977 follow-up, Rumours, with sales of more than 19 million copies, had as its memorable songs “Second Hand News,” “Never Going Back Again,” “Go Your Own Way,” “Songbird,” The Chain,” “You Make Loving Fun,” “Gold Dust Woman” and “Don’t Stop.”

After a dozen years, Buckingham took the advice of one of his songs (“Go Your Own Way”) and left the band, due to fatigue from touring and the dissension within the band, aggravated by over-the top success, drugs and crumbling personal relationships.

Thanks to a famous Arkansan, Buckingham began working again with his former band when Bill Clinton was elected president in 1992. Since a major part of the Clinton campaign had been its use of the Fleetwood Mac song “Don’t Stop” (the name of which some assumed to be “Don’t Stop Thinkin’ About Tomorrow”), the band was invited to perform at an inaugural event.

By 1997, band members were again on friendly terms, so they put together a reunion tour, although there was no new album until 2003. Say You Will became the first studio album in 15 years to include Buckingham and Nicks (although Christine McVie was missing, having left in 1998).

On his website, Buckingham indicates that his “intimate, one-man show” will feature songs from his solo albums, “along with a variety of Fleetwood Mac classics” for those wishing to hear their old favorites in a non band format.

He released his seventh solo album, Seeds We Sow, in September 2011 on his label after singing and playing every instrument, recording it in his home studio, plus producing and engineering the album. The only cover song on it is a 1967 Rolling Stones song, “She Smiled Sweetly.” He told Rolling Stone magazine a month before the album’s release that “the songs are all about the accumulation of choices that we make every day and the karmic part of that — which is where the title … comes from. In my own life I've made a lot of choices that weren't always popular with people around me. Only in the last few years have I been able to look at them with the perspective of time.”

Referring to his current tour, Buckingham says on his site: “As I've grown as an artist, I’ve gotten more and more in touch with my center and that center is voice and guitar. Over time it has become increasingly vital to express more with less; that is my touchstone now, and the embodiment of that philosophy is what will be largely represented in the new show. I've been thinking of doing this kind of tour for a while, and am quite excited to be doing something new, something outside my comfort zone.”

But something old is returning. There are reports — confirmed by Buckingham and Nicks — of another Fleetwood Mac reunion and tour in 2013, although McVie continues to resist offers to return to the band, which now consists of Buckingham, Nicks and original members Mick Fleetwood and John McVie.

Tickets available for Monday's show at Juanita's Cafe and Bar