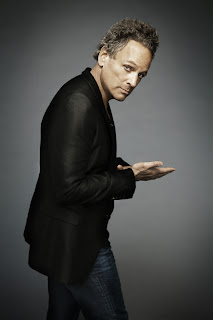 The veteran Fleetwood Mac singer-songwriter-guitarist talks with THR about being onstage alone, changing the way he sings some songs and why "Rumours" would create a feeding frenzy today.

As a guitarist known for his rich, almost orchestral finger-picked playing style, solo acoustic might be the last thing you expect from Lindsey Buckingham. But the Fleetwood Mac veteran isn’t limned in by expectations. (Something about co-penning a 40 million-selling album and being a member of the Rock and Roll Hall of Fame.) Last week he released Lindsey Buckingham: One Man Show, culled from his current solo American tour.

When commercial concerns became an issue in Fleetwood Mac, Buckingham’s experimental explorations manifested a solo career that has endured fits and starts. Of late he’s been quite prolific, releasing three discs in six years exploring the kind of intimate, keenly crafted and emotionally edgy songwriter pop favored by indie artists such as Sondre Lerche, Joe Pernice and Ron Sexsmith.

Following the raw, almost lo-fi intensity of 2011's Seeds We Sow, on which he played every instrument, Buckingham took the next logical step embracing the austerity of the solo performer. He captured a Sept. 1 show in Des Moines, Iowa, and made it available online through the wonders of digital distribution.

Buckingham spoke with The Hollywood Reporter about the freedom of being onstage alone, defying the mediocrity of commercially successful career artists and Fleetwood Mac’s immediate plans -- calling from a concert stop near Grand Rapids, Mich., where, liberated from a tour bus, Buckingham had wandered off the beaten path again.

The Hollywood Reporter: It seems that after Rumours there was a choice of how your career would be going forward. Did the way Fleetwood Mac handled that inform your artistic choices?

Lindsey Buckingham: Oh, absolutely. Tusk was clearly a line in the sand that I drew. If that album had been … embraced longer term by the band -- I mean, they were happy with the results of that album, until it didn’t sell anywhere like Rumours numbers. Then there was this sort of dictum that came down, “We’re not doing that anymore.” It was really only at that point that I said, “OK, if they aren’t going to explore the left side of the palette, I guess I’m going to have to do solo work.” Otherwise maybe Fleetwood Mac would’ve gone in a whole other direction and there would never have been any need for the solo work. But, you know, that was fair enough.

THR: Well, it feels like otherwise we would’ve lost a lot of great music that would’ve had to pass through that filter. I think we got the best of both worlds.

Buckingham: I do too. It hasn’t always been easy, but you get to a point where you’re not doing the solo stuff with any kind of expectation in terms of commercial or a business outcome, you’re doing it because you believe in this. The fact that I have the freedom to do that and, I guess, after all these years still have that kind of ethic is a nice place to be. Because a lot of times people that have been doing it this long -- it’s not necessarily like you forget who you are, but you just don’t care anymore. So to have the idealism and feel like I’ve got the small-scale thing to keep me moving forward and at least aspiring to be an artist and can take risks. It’s a nice place to be.

THR: It’s funny because I was talking to Richard Thompson and he was saying, kind of puckishly, “The secret to my success is my continued failure.” Do you agree?

Buckingham: Well, yeah. He’s right. Because, again, you sort of hit on it when you talk about Tusk and the aftermath of Rumours. There are many elements and a lot of pressure from the business-model side of things that wants you to uphold this brand. That can be something which works well in the short-term. Certainly, from the business point of view, part of the model is if something’s working to run it into the ground and then move on, right? But from an artist’s point of view, it can be the beginning of painting yourself into a corner. I’m sure that’s what Richard means; he’s never had to do that.

THR: Having that pressure of people expecting that thing from him ...

Buckingham: If you can be who you are and remember who you are -- that’s half the trick when you have a certain amount of fame, and lucky for him he never had to go through that. I’m quite happy Rumours didn’t occur at a time where, say, the media is where it is now. It would’ve really fed off that. I mean, we brought out the voyeur in everyone because the album was a tabloid on our lives, but there was a certain amount of respect to it. I think people were actually invested in it. It would’ve been more of a feeding frenzy today.

THR: You’ve been fortunate to indulge both parts of your brain, as you say. You’ve written for arenas with thousands of people, and now you have a much more intimate album. How is it different?

Buckingham: Well, it is, and I think it took me a couple shows to get comfortable up there. The first couple shows I did by myself I was looking around wondering where the rest of my band was.

Buckingham: Yeah, but that’s a good thing too. You really are right at the center of what you do. The real challenge of putting the show together wasn’t -- I knew I could do a series of songs on my own, but how do you make a whole show that has an arc and goes somewhere? I realized doing something like “Go Your Own Way” or something like “I’m So Afraid,” which I do in the show, I was going to need a little help from a pedal to play an extra part. I’m not trying to fool anybody, I’m just doing it sparingly and tastefully, and that really opens up the whole vocabulary of the possibilities for this show to succeed and also for other things to try down the line now that I know they work.

THR: It must be a very different experience sonically to play solo instead of with a band.

Buckingham: For sure, plus when you’re up there by yourself without anyone else, you have a freedom to sort of spontaneously work a dynamic or to explore the possibility and the range of dynamics in different ways. One of the things I’ve gotten more centered on during this particular set of shows has been my vocals. It actually changed the way I sing some of these songs a little bit because you can hear so well, and there’s so little going on it’s liberating.

Buckingham: We have some dates on the books next year, and we’ll start rehearsing in the beginning or middle of February, so that’s a good thing. It’s about a year too late, but that’s the way it goes.

THR: Could these rehearsals lead to new music, or will you need to get together separately?

Buckingham: Rehearsing is really just rehearsing. If we were to get into something new-material-wise, that would be something we decided on ahead of time and you put yourself more in that format. There are some things I’ve cut with John [McVie] or Mick [Fleetwood]. I don’t even know what they’re for, but if they turned out great, maybe some of that would turn out being something down the line. But we haven’t spent enough time together to figure out what we want to do with that stuff. Anything is possible.