Review Lindsey Buckingham South Milwaukee "It was a little strange. It was also fantastic." 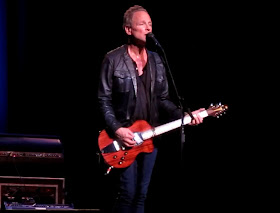 "About the concert: It was a little strange. It was also fantastic. Definitely more fantastic than strange."


Lindsey dressed his taut frame in a black leather jacket, a black shirt with the top two buttons undone, and dark slacks. His skin was bronzed and tight, and his chest appeared smooth and shiny. He is a 63-year-old man who could find work as a body double for a member of One Direction. When he walked out onstage, he briefly held a facial expression that said, “I can’t believe I’m playing a high school auditorium on a Saturday night at my age.” But that quickly dissipated. Lindsey got to work. Lindsey played by himself, switching between electric and acoustic guitars. He worked way harder than he had to. He played loud; even on the acoustic, the arpeggios sent shock waves down to my soles. When he sang, he sang with the twitchy, hammy, totally-unnerving-when-you-see-it-in-the-flesh Lindsey Buckingham intensity. “Go Your Own Way” might be a soft-rock oldie that scored a million divorces and 100 million barbecues in the past 35 years, but for Buckingham, it seems like it still kind of means something emotional and painful. When he denounces Stevie Nicks as unfeeling and slutty, he makes you believe the anger is fresh for him. Onstage, Lindsey Buckingham does not seem at all settled.