Lindsey Buckingham points out, his solo work is ultimately good for Fleetwood Mac 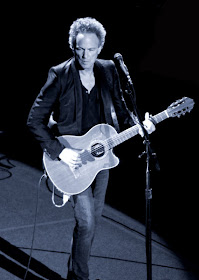 Lindsey Buckingham: “You Have To Take Risks… Even At The Risk Of Diminishing Commerce”
Brian Ives, CBS Local


Lindsey Buckingham has just released One Man Show, a solo acoustic live album, taken from his first tour in that format. The track listing spans his career; it includes “Trouble” from his solo debut, 1981’s Law And Order, his 1984 hit “Go Insane,” “Seeds We Sow” from his 2011 album of the same name and a number of Fleetwood Mac classics, including “Never Going Back Again,” “Big Love,” “So Afraid” and “Go Your Own Way.” There’s even “Stephanie,” from the Buckingham/Nicks album that he did with Stevie Nicks before they joined Fleetwood Mac.

Buckingham famously quit Fleetwood Mac in 1987, just after the release of Tango In The Night, partially because he wanted to focus on his own records. Since rejoining the band in 1997, he’s remained prolific on his own, releasing three solo albums and touring frequently (One Man Show is his third live release during the same time period).

He tells CBS Local, “Doing the amount of solo work that I’ve done in the past decade, it clearly is kind of the antidote to the experiences I was repeatedly having in Fleeetwood Mac for years, where I would try to work on a solo album and get it out, and (the solo songs) would either be co-opted because of group pressure, or it would be set aside. And that’s fair enough too, because if you’re in a band, you’ve got to be a band member in good standing and you have to keep the big picture in mind.”

He says that these days, he has hit a good balance between working solo and being in the band.  And, he points out, his solo work is ultimately good for Fleetwood Mac: “It allows me to bring back something into the band that I might not have otherwise. I keep growing as an artist, and keep pushing my limits a bit, in a way which I couldn’t do in Fleetwood Mac.”

He points out that there’s a big difference between what he does on his own, and what he does with the group. “What I do as a solo artist is kind of tapping into the left side of the palate, the more esoteric side of things. So I think inherent in that is losing a greater portion of the people who might be Fleetwood Mac fans for different reasons. Obviously it’s the difference between playing in an arena and playing in a theater.”

He’s fine with playing to smaller crowds on his own. “That’s always part of the equation when you get to a certain level of popularity, there’s kind of a corporate mentality that kicks in,” and he mentions the need to uphold the band’s “brand.” “(But) it isn’t necessarily the best adage to follow as an artist. You have to kind of remember who you are, and you have to be taking risks, even at the risk of diminishing commerce. That’s sort of the equation I’ve been living for many years and have somehow managed to strike a balance between what I call ‘the big machine’ and ‘the small machine.’ At this point they support each other, and it’s a good place to be. “

One Man Show is availble now, exclusively at iTunes.

Buy "One Man Show" Available ONLY at iTunes
Nickslive at Tuesday, December 04, 2012
Share