Fleetwood Mac announce new music, 2013 tour
Stevie Nicks talks with MSN Music about the band's upcoming tour and when their new songs will be available
By Mark Brown
Special to MSN Music 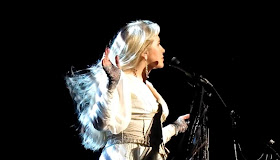 It was hardly the world’s best-kept secret. Lindsey Buckingham told MSN Music last year that he was looking forward to a Fleetwood Mac tour, and Stevie Nicks basically said the same thing on TV earlier this year.

But now it’s a reality, with the 34-city tour kicking off on April 4 and tickets going on sale as early as Friday, Dec. 14. And that’s not all. A deluxe version of “Rumours” will come out with the tour and will include unreleased outtakes and live songs. Plus, the band – Buckingham, Nicks, Mick Fleetwood and John McVie – has recorded two new songs to be released before the tour – one in just a few weeks.

Nicks sat down for an exclusive interview with MSN Music about how it’s all happening again. A couple of interesting tidbits: Nicks doesn’t own a computer and when she’s trying to figure out how to sequence a concert – her own or Fleetwood Mac – she turns to her trusty cassette recorder.

MSN Music: When do you know it’s time to reunite?

Stevie Nicks: I think every three years is perfect. It’s just long enough for everybody not to remember it. They go, "I didn’t see them last year and I didn’t see them the year before that." Fleetwood Mac really wanted to go out this year, and I said I’m taking another year for "In Your Dreams." In the current music business scene I need two years to back up this record … This record meant so much to me I took the extra year. And it hadn’t been three years. Our managers have gotten through our skulls that it needs to be an event. It doesn’t need to be, ‘We just saw you last year.’ … We start up in February, and in my humble opinion, next year will be the year of Fleetwood Mac. It will be spectacular and grand and fantastic.

And you have new music?

I went up to Lindsey’s house for about four days. He and Mick and John had gone in at the beginning of this year and recorded a few songs. They wanted me to come in, but my mother had just died and I really was in no frame of mind to write songs or be in a recording studio. So I said I can’t do it. They recorded several songs. When I went to his house, I chose two of the songs that I really liked and put vocals on them. Lindsey had already put his leads on them. I put my parts on, and it came out great, I have to say. Not that I was surprised. If we try, stuff comes out great.

So how will they come out?

Lindsey and I are not computer people. We understand music piracy, but that’s about it. We do understand that nobody really wants 14 songs. That’s too bad, because we’d like to do 14 songs, but we get it … We have these two and when we get to January we throw a new song out and then another right before we go out. It is two brand-new songs for people to hear who we are today. If there’s an insane rush on those songs, maybe when we come off the road we’ll go and do two or three more. Lindsey said, "If we go out with (new music), they’ll know we care." Of course we care!

Do they have titles?

Yes. One of them is called "Sad Angel" and one is called "Miss Fantasy."

Do you save any songs for Fleetwood Mac? “Stars Are Crazy” on Lindsey’s last album would have been perfect for the band.

You’ve toured so much in the past few years on your own with lots of Mac songs in the mix. Do you burn out?

When we go up to play, we try to make it different each time. "Gold Dust Woman" morphs every time we walk onstage as Fleetwood Mac. It’s ever-changing. All the songs are … Lindsey is all about change. We have to tell him, "You can’t change the solo in 'Go Your Own Way,' Lindsey! Everybody knows it by heart." That’s hard for him because he’d like to go off on some complete other thing. We have our foundation (of hits)…then we move on and we go back through all the records and we play everything we like. We each have a different 30 songs. We put them up on a board and start playing a minute and a half of each song. If we start to feel it, then we start to work it out. We’re trying to get some more unfamiliar songs every time we go out. It’s fun. We want to stand up there and be excited to do a song we haven’t done for a while. Say, "Sisters of the Moon." We haven’t played that song since the '80s. Maybe it’s going to work this time. There was a time we didn’t do "Sara" onstage. There was a time we didn't do "Beautiful Child" onstage, which is my favorite song. So we started doing it. Unless you do them onstage you kinda forget they even exist. I sequence the concerts. It’s my forte. I put them on cassette. It’s the only way I can make a tape like that.”

Well, I never thought I’d hear “Silver Springs” live since it was only a B-side from “Rumours” and that ended up being the hit when you first reunited.

I know! It became a single. That song was my mom’s. It was taken off the record and put on the back of "Go Your Own Way" and nobody ever heard it again till "The Dance." My mom started getting these magical checks. She’d say, "I got a check for $20,000!" I said, "It was a long time coming, Mom.”

Did the band ever apologize for dropping it from the album?

Uh, no. They felt it was the right thing to do. It was a team. How was I gonna fight that? But I was very disappointed because I felt it was one of the best songs I ever wrote. That was a little bit of a stupid move. It’ll be in the live show for sure.

Your career has clearly endured, but the music industry is in deep trouble now.

The next few generations aren’t going to have their own Fleetwood Mac or their own Led Zeppelin. The record companies don’t have money to develop artists. Or to support them while they are developing. Or if one record does really well and the next record tanks they’re going to drop them. I feel very bad for them. I think in 20 years they’re still going to be listening to the big acts of the ’70s and the '80s. It’s not their fault. When the Internet came out, everyone thought this is so great. But unfortunately you buy a record now, you find the last Barnes & Noble in town, you put it in your computer and you send it out to 500 of your closest personal friends. … I’m so sorry that the whole younger generation will never experience that. It was so much fun. And nobody knows how to fix it. … It should go back to vinyl. That would force people to buy record players and records. It’s a lot harder to copy a vinyl record than a CD. I wish I could wave a magic wand and fix it.
Nickslive at Monday, December 03, 2012
Share