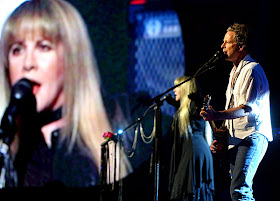 As long rumored, Fleetwood Mac will hit the road in 2013 with a 34-date American tour that will see the band visit all the major U.S. markets, along with a stop at the Hollywood Bowl on May 25. The dates, which the band announced Monday, will feature co-founders Mick Fleetwood and John McVie along with longtime vocalist Stevie Nicks and singer-guitarist Lindsey Buckingham. Fleetwood Mac is touring for the first time since 2009. (Christine McVie no longer tours with the band.)

In addition, according to Nicks, Fleetwood Mac has been working on new songs and is hoping to release at least two of them in anticipation of the tour. Nicks and Buckingham spent four days in the latter’s home studio in November, an interaction that hasn’t happened in a decade but whose history stretches over 45 years.


On the phone, Nicks was chatty, offering unfiltered thoughts on planning the set design, the set list, and the ways in which she prepares to get back into Mac. But she sounded relieved and most enthusiastic about reconnecting with her longtime creative -- and, for a time in the '60s and '70s, romantic -- partner Buckingham to work on new material.

That process started when bassist McVie, drummer Fleetwood and Buckingham got together in early 2012 to work on new material. Nicks was unavailable due to the death of her mother. But a couple weeks ago, said Nicks, “I went up to Lindsey’s house, he played me all of the songs, and we chose two. He said, ‘I really tried hard to be you, to really see through your eyes when we were doing these songs, and make these songs that you would really like, and that you would really relate to.’ ”


Full article at the LA Times

Pop & Hiss will have more of Nicks' conversation on  Tuesday.
Nickslive at Monday, December 03, 2012
Share