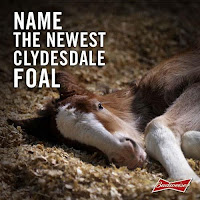 The star of this years Budweiser Super Bowl commercial will be a newborn Clydesdale.

Budweiser has launched its first-ever Twitter account that went live this past Sunday, and used the occasion to tweet the first photo of the newborn and are taking name suggestions. 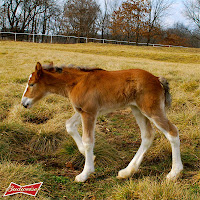 CBS this evening (1/30) aired a show featuring Super Bowl Ads you'll be able to see this Sunday and one of them was a short clip of this ad with "Landslide" playing in the background. I'm assuming that "Landslide" will follow in the full ad when it airs on Sunday.

Kinda cool!  Watch The Super Bowl this Sunday for the 60 sec. spot.


Advertisers are paying upwards of $3.7 million just to air their spot during the big game, major synchs can fetch anywhere from $100,000 to upwards of $1 million, depending on the artist, number of territories airing the ad, the length of the commercial "flight," or airtime, and whether the song has been synched previously.

One synch likely on the upper tier of that spectrum is Stevie Nicks’ “Landslide,” which was commercially licensed for the very first time for Budweiser’s "Clydesdale" spot, which debuted online early Thursday. “We knew she was very protective,” Paul Chibe, Budweiser’s VP of marketing, says of Nicks’ tentative approach to synchs, “but when she saw the script she felt it was an appropriate presentation, that it was an elevation of the music and not something that would take away from it.”


The spot, directed by Jake Scott, shows the animal growing older—until its breeder must hand it over to the folks at Budweiser. The ad then jumps ahead three years, as the breeder reads in the newspaper that the Clydesdales will be visiting his area.


Hoping for a reunion, he goes to the parade. You can guess what happens from there.


It's a poignant and well-shot commercial—in keeping with some of the better Budweiser ads through the years—made all the more evocative by the use of Fleetwood Mac's "Landslide." from the 1975 "Fleetwood Mac" album.