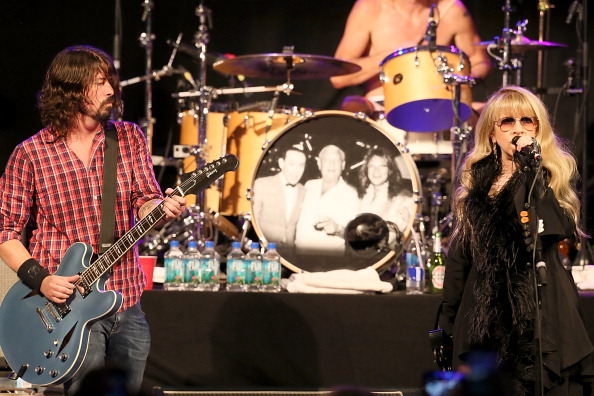 
Stevie Nicks was next, and she surrounded a somber new song, "You Can't Fix This," with more familiar fare from her own catalog and Fleetwood Mac's, including a version of "Landslide" with Grohl accompanying her on a 12-string acoustic guitar.

After Nicks finished with "Gold Dust Woman," given added heft by the Foo Fighters, she yielded to Chris Goss from Masters of Reality.

"There's not going to be too many shows where you are going to see these people who are onstage," Grohl told the crowd before bringing out Nicks for a "dream" duet of Stop Draggin' My Heart Around.

Before performing You Can't Fix This, a new song that appears in the documentary and on its soundtrack (both out earlier this week), Nicks dedicated it to a godson who died of an overdose. Grohl & Co. provided tight underpinnings for her performances of Dreams and Landslide and drummer Taylor Hawkins seemingly mustered up his inner Mick Fleetwood for his intense thrashing at the end of Gold Dust Woman.


Stevie explains the meaning behing "You Can't Fix This"

The three-hour plus show featured several high-proflle artists, such as Stevie Nicks, John Fogerty, Rick Nielsen of Cheap Trick and Rick Springfield, plus Lee Ving of the punk band Fear. During a set by Chris Goss of Masters of Reality, Brad Wilk of Rage Against the Machine and now Black Sabbath sat in on drums,

After an opening set by Alain Johannes, a Queens of the Stone Age collaborator, Nicks took the stage.

She and Grohl launched into "Stop Dragging My Heart Around," with Grohl taking Tom Petty's vocal parts. After that, Nicks introduced a new song she'd written, "You Can't Fix This," a dour ballad that temporarily lost the crowd of about 3,000.

She got it back immediately with a few of her best-known songs: "Dreams"; "Landslide," which featured Grohl on 12-string acoustic guitar and which prompted a heartwarming sing-along throughout the huge venue; and "Gold Dust Woman."

That one ended with a long, raucous instrumental that brought out the beasts in Grohl and Foo Fighter drummer Taylor Hawkins.

Full Review at The Star

After half a dozen songs bashed out with Johannes, Nicks stepped to the mic and proved to be more than up to the task of leading a bashing hard rock band.

She and Grohl pointed at each other as they sang the chorus of "Stop Dragging My Heart Around" (see, Grohl is his generation's Tom Petty!), and Nicks performed Fleetwood Mac's "Dreams" with the band and "Landslide" with Grohl alone on guitar. She sang excellent new song from the "Sound City" soundtrack, "You Can't Fix This" -- graceful and tuneful, with a leaning, weaving riff more akin to Waddy Wachtel than Lindsey Buckingham. Swinging her ribboned tambourine and wearing shades, Nicks was in great voice and moving with an ease I've not seen on stage in a long time, particularly when the band began a surreal, clanging opening séance to "Gold Dust Woman," as Nicks waved her scarf with her back to the audience and conjured her old witchy self. With the Foo Fighters cranked to 11, Nicks wailed and howled and raised the dead, holding her own with the muscled band all the way through the cacophonous conclusion.

Grohl's Sound City Players are a revue of this recording studio's alum, including both big names (John Fogerty, Stevie Nicks and, of course, Grohl and his fellow Foo Fighters), lesser-known talents (Johannes,Fear's Lee Ving and Slipknot's Corey Taylor, sans mask) and one retro favorite (Rick Springfield!).  Many of the key players took turns fronting the band, performing generous — in some cases, too generous — sets of songs. Grohl and other musicians (notably, his Foos) backed up the singers.

There was plenty of filler, but also some killer (moments). A number of them came early in the night when Nicks -- whose documentary film, "In Your Dreams: Stevie Nicks," was screened at SXSW earlier in the day -- was onstage.

Nicks' voice wasn't great, but most of the songs sure were. The band delivered fantastic versions of such Fleetwood Mac classics as "Dreams," "Gold Dust Woman" and, especially, "Landslide," which featured pretty much everyone in the house singing harmony.


Alain Johannes' artful variety gave way to Stevie Nicks' parade of Fleetwood Mac hits, including a moving "Landslide" and a powerhouse "Gold Dust Woman." Nicks also won cheers when she said she was so impressed with her first visit to SXSW that she plans to return next year and rent a place for three weeks to hang out. 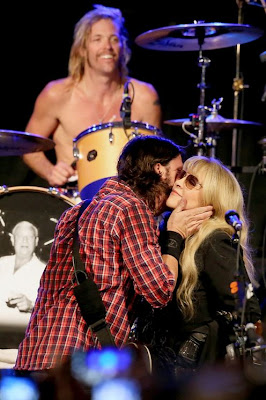 
"It's my life's greatest gift that I get to call up these people who I consider heroes and have them come onstage and jam with me," Grohl said.

Among those heroes was Stevie Nicks, who sang tunes including "Stop Draggin' My Heart Around," "Landslide" and (a very dreamy) "Dreams." She also did "You Can't Fix This," a strong new song from the "Sound City" soundtrack. But Nicks was best in a muscular rendition of Fleetwood Mac's "Gold Dust Woman," for which she went into her signature whirling-dervish mode, arms outstretched, long blond hair whipping around her.

In an onstage interview earlier Thursday with NPR music critic Ann Powers, Nicks said she'd taken ballet classes early in her career to learn how to use her body while performing. "I can captivate with my hands," she'd said, and she was right.

Full Review at the LA Times

Shifting the bill a bit, Stevie Nicks, who had been closing shows, performed second, offering up the ‘Sound City’ soundtrack favorite ‘You Can’t Fix This’ alongside the minimal backing of ‘Landslide’ and a stellar set closer in ‘Gold Dust Woman’ with most of the Foo Fighters present.

At 64, age has counterintuitively improved Stevie Nicks' bourbon-and-cigarettes voice, as many of the first-half highlights went to her. The mournful hook of Fleetwood Mac's "Dreams." The first verse of "Landslide," which saw Nicks singing over Grohl's acoustic, 12-string guitar accompaniment, silencing a celebratory Friday night crowd. The extended jam in the middle of "Gold Dust Woman" saw Grohl barely hiding a huge grin throughout. "If there's one person who walks it like she talks it...," said Grohl of Nicks.

In fact, it probably won’t ever happen again. That lineup along with Cheap Trick’s Rick Nielsen, Slipknot singer Corey Taylor, Rage Against The Machine drummer Brad Wilk, Nirvana’s Krist Novoselic and Chris Goss of Masters of Reality all were part of Sound City Players Thursday night.

Dave Grohl, who leads Foo Fighters and played drums in Nirvana, put together the Players for a documentary about a now-defunct Los Angeles recording studio, Sound City, then took the show on the road playing New York, London, Los Angeles and a 3 1/2 hour finale at Stubbs BBQ.

Highlights of the show, which included performers playing their old hits and songs from the documentary soundtrack:

Nicks joining with, essentially, the Foo Fighters for a handful of songs with Grohl unleashing his inner Tom Petty on the duet “Stop Draggin’ My Heart Around,” a dreamy version of “Dreams’ and a dynamic “Gold Dust Woman,” a surprising choice for Nicks who was in good voice and full stage-witch persona. 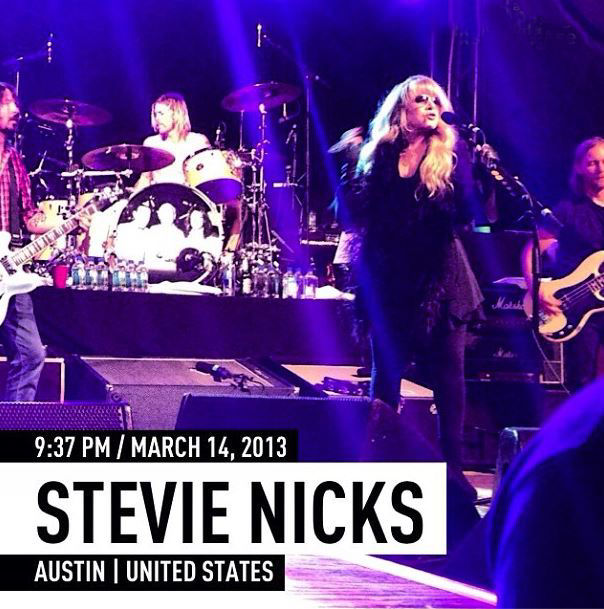 Grohl repeatedly noted how fortunate the crowd to see all these artists together on one stage, and it was tough to argue.

The emotional high point came early, during Nicks’ set, which included “Stop Draggin My Heart Around,” “You Can’t Fix This,” “Dreams,” “Landslide” and “Gold Dust Woman.” If you were sitting around at home you would probably never think to yourself, “You know what would be awesome? Having Stevie Nicks sing Fleetwood Mac songs with the Foo Fighters as her backing band.” But it was.

“Stop Draggin” and “Gold Dust Woman” were amplified into hard arena jam-rock anthems (aided heavily by the Foos’ Taylor Hawkins on drums). Then the band mostly stripped down to Grohl and Nicks for an intimate take on “Landslide.” “To play this song with you…” Grohl started, by way of introduction, then didn’t finish the sentence and fans got the message that there were no words to describe what it meant to him, and Nicks pleased the locals by noting that she was so impressed with Austin she wanted to move there.

1) Dave Grohl Totally Fanboyed Over Stevie Nicks
What makes Dave so likable--nay, lovable--is the fact that he's as big and dopey a rock fan as anyone you might find in the front row of his concerts. When he introduced the fabled Fleetwood Mac frontgoddess on Thursday, he was grinning the grin of all Cheshire Cat grins as he declared: "We're so lucky, people, that we can invite heroes onstage tonight!" Stevie then sailed out in all her white-magic witchery finery for a mini-set that included a "Stop Draggin' My Heart Around" duet with Dave and Fleetwood's "Dreams," "Gold Dust Woman," and the gorgeous "Landslide," the latter of which had me reaching for the Stubb's quintuple-ply BBQ napkins to dab at my teary eyes. Dave positively raved about Stevie, telling the audience, "When she writes a song, it's 100 percent Stevie. She doesn't care if she going to make you freak out or cry." Honestly, I did a little bit of both at Thursday's show.

See the rest at Music.Yahoo.com