Stevie Nicks on 'In Your Dreams,' Fleetwood Mac's Tour and Longevity Secrets At SXSW 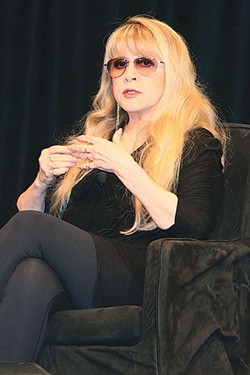 Stevie Nicks on 'In Your Dreams,' Fleetwood Mac's Tour and Longevity Secrets At SXSW
By Gary Graff, Austin
Billboard

Stevie Nicks was on hand at South By Southwest to screen “In Your Dreams,” the Dave Stewart-directed documentary about the making of her latest album of the same name, and to play a killer set with Dave Grohl’s Sound City Players. But you can never limit the always-engaged Nicks to just one or two things, so when she sat for one of SXSW’s celebrity interviews on Thursday at the Austin Convention Center, she had plenty to say. Here’s five things we learned during the nearly one-hour session:

She’s Still Devoted to Her Band: Nicks recalled that while she was making her first solo album, “Bella Donna,” the other members of Fleetwood Mac “were terrified that I would do that record and then quit. And I said to them, ‘You guys…’ I wanted to go around and hold each one of their hands and say, ‘Listen, loves, I am never going to leave you. I just need another vehicle. I have trunks of songs…that are never going to be heard. But it’s never going to beat Fleetwood Mac.' What I do is the Lear Jet; they’re the 738. I really did convince them I’m not going anywhere. ‘I love you guys and I love my band. I would never break up Fleetwood Mac, ever. I just take their vacations, that’s all.'”

The Mac Is Ready to Get Back (On The Road): “I’m in rehearsals with them now. We go from ‘Go Your Own Way’ to ‘Sara’ to ‘Never Going Back…’ to ‘Landslide.’ This time we’re actually doing ‘Sister of the Moon,’ which we haven’t done since 1979 or 1980. And it’s dark; (sings) ‘Intense silence as you walk in the room,’ and people are like, ‘What does that mean?’ That’s me talking to me, talking to my alter ego and the person that’s having a hard time being a rock star…Twenty-four songs is what we’re doing. I’m sitting there looking at the board going, ‘Oh my God, we’re only halfway through. We have 12 songs to go and we’ve been playing for six hours!’"

She Has a New Song in the Works: “I just saw a movie I was going to write a song about that I was inspired by in a very strange way – ‘Anna Karenina.’ I’m watching this movie and I’m really riveted by the fact that she was happy in her marriage and it was fun…and then she meets this mom who asks her, ‘Have you ever really been in love?’ What a question! And she’s like, ‘What is love, really?’ and thinks about it. Then she meets her son and it happens. I never jumped in front of a train, but what obsessive love can do to people, I’ve seen it in my own life and I saw it in that movie and it really affected me. I’ve been there and I don’t want to be there again. So now I’m just walking around with this in my head, and I’m so ready to go to the grand piano with white candles and (write)."

We’ll Have Her to Kick Around for Many Years to Come: Since finding a vocal coach in 1997, Nicks said she’s in good enough shape to last a lifetime. “Opera singers plan to sing into their 80s. I plan to not be doing 190 shows when I’m 85, but I do plan to be out there singing when I am a seriously older woman, ‘cause I think my voice will still be pretty good because I’m not gonna let it go. The people that can’t sing anymore that had great voices are people that went away for five years and just decided to come back. You can’t just come back. You have to keep singing – or dancing."


Stevie Nicks Sees Women's Rights Slipping, 'And I Hate It'
At SXSW talk, she addresses feminist gains and losses, heroes from Janis to Jimi
by Dan Rys
RollingStone
March 15, 2013 10:55 AM ET

Powers conducted a Q&A with the very busy Fleetwood Mac singer – in addition to performing with Dave Grohl's Sound City Players at SXSW, she has a new tour and is set to release a new solo album. The talk ran down the story of Nicks and Lindsey Buckingham joining Fleetwood Mac, her regimen for keeping her voice in shape even at the age of 64 and her myriad performing influences. But it opened and closed with a discussion about feminism – not only in the largely male-dominated world of rock & roll, but in society today.

"We fought very hard for feminism, for women's rights," Nicks said in response to a question from the crowd. "What I'm seeing today is a very opposite thing. I don't know why, but I see women being put back in their place. And I hate it. We're losing all we worked so hard for, and it really bums me out."

Nicks and bandmate Christine McVie were strong female figures in an industry where many male musicians were hero-worshipped by fans across the world, and Nicks said they worked to change the perception of women within the rock & roll circles of the Seventies. "I said to Chris, we can never be treated like second-class citizens," she explained. "When we walk into a room we have to float in like goddesses, because that's how we wanted to be treated. We demanded that from the beginning."

Nicks also recalled her days in San Francisco in the late Sixties and early Seventies, when she and Buckingham opened for headliners from Janis Joplin to Jimi Hendrix. "Flamboyance and attitude from Janis, humbleness and grace from Hendrix, and a little bit of slinky from Grace Slick," she said. "Those were the three people who I emulated when I was on stage."

And while it's been more than 30 years since she took up her place in Fleetwood Mac, her voice – bolstered by a vocal coach she has worked with since 1997 – isn't letting her down yet. "Opera singers sing into their 80s," she said. "I don't plan to be doing [hundreds] of shows when I'm 85, but I do plan to still be out there singing when I'm a seriously older woman."

Check out RollingStone comments section on this article.. Stevie's started a great debate!

"I will always be a witch." Sure, she was talking about a Halloween costume, but that statement toward the end of Stevie Nicks' hourlong interview summed up many lingering notions about the Fleetwood Mac songstress. Like her mystery, her flamboyance, and yes, her entanglements with the male libido. NPR's Ann Powers posed questions, but the verbose Nicks needed little prompting. She wound in both her solo career and time with the fabled band, at times erring to a sleepover-style boy dish. Continual jabs at Lindsey Buckingham ("Oh, Lindsey likes to lock himself in a studio and make records no one hears.") and waxing about Dave Stewart seemed to miss the point. For an icon to many women, this kind of quintessential trait might have disappointed, but the fire in her eyes when she ripped off her sunglasses for the first time only came when she talked about the feminist movement. The phrase "woman in a man's world" popped into Powers' questions repeatedly, but it has less to do with Nicks' existence in a music business dominated by men than with the world she created for herself – magical, mystical, and maybe a little narcissistic. And that's the way we like her.