Amid all the chaos that's been plaguing Boston this week, it's a wonder anyone felt like celebrating Fleetwood Mac's return to the Boston area.  But they did, fans packed the TD Garden last night turning out in droves for a 2 1/2 hour respite.

The show began with Fleetwood Mac displaying the "Hearts For Boston" solidarity drawing designed by local Boston artist Dan Blakeslee on the jumbo back drop behind the band on stage and ended with "Boston Stong" blazed across the screen during the encores.  In between these two gestures of support for the people of Boston, Fleetwood Mac's 23 song unchanged setlist didn't disappoint with multiple words of encouragement from the band including Stevie's dedication of "Landslide" to the city and Mick acknowledging that the city is going through a rough time and to 'don't stop' thinking about tomorrow' prior to launching into the song. The show ended with Stevie telling everyone to keep their chin up, cause you are "Boston Strong" and you will make it! (Video below) 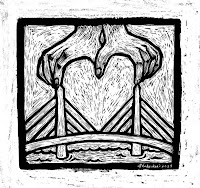 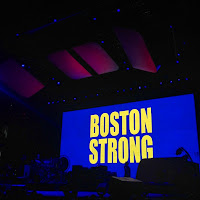 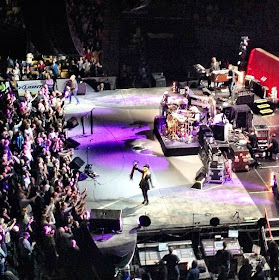 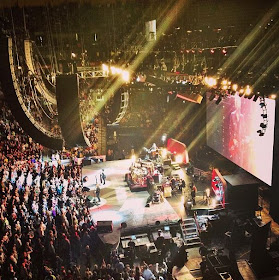 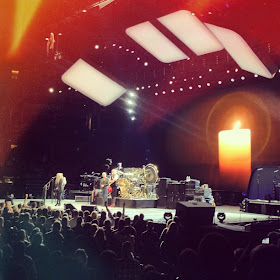 
Fleetwood Mac did Boston proud! There was certainly a lot of love for the city and its people radiating from the TD Garden stage Thursday night. After the electric opening one-two punch of “Second Hand News” and “The Chain,” vocalist Stevie Nicks addressed the near-capacity crowd. “When I was young and I was sad or blue because of hard times, my mama told me to sing, that it would make me feel better. And that’s what we’re going to do for two-and-a-half hours. We’re going to sing the blues right out of Boston.” Later, Nicks dedicated ‘Landslide” to a soldier, Vincent, she met at Walter Reed hospital, and his Boston family. “They are Boston strong,” she said.

The audience joined in on the chorus, turning it into an empowering cathartic experience. That song, of course, was written by retired member Christine McVie. The band certainly has a different dynamic in concert without her. Not better, not worse, just different. Fleetwood Mac these days has evolved into the Lindsey Buckingham/Stevie Nicks Show with founding members Fleetwood and bassist John McVie relegated to backing-band status. If Nicks is the caring, new agey earth mother, guitarist Buckingham is the mad genius who orchestrates everything. He stayed on stage for the entire show, delivering one spine-tingling guitar solo after another. He is a bit show-offy, but the guy ranks with the all-time great guitarists and I dare say his 10-minute blast through “I’m So Afraid” will likely be the best shredding a Boston audience will see this year. This is the riff that launched 1,001 air guitar solos in front of bedroom mirrors all across America in the mid-‘70s and it remains totally awesome. And Buckingham does it all on an undersized guitar that’s not much bigger than a ukelele. This is the Mac’s first tour in three years and the band was firing on all cylinders. So many great songs, all delivered with gusto: “Rhiannnon,” “Gold Dust Woman,” “Gypsy” and the solo hit “Stand Back” from husky-voiced, whirling dervish Nicks; “Go Your Own Way,” a solo acoustic “Never Going Back Again” and “Tusk” from Buckingham. More than half of the 23 songs performed came from those three masterful 1970s albums “Fleetwood Mac,” the 35-year-old “Rumours” and the indulgent, underappreciated “Tusk.” Although the crowd came to hear the hits, this is no mere nostalgia act. A new song, “Sad Angel,” from an upcoming EP, rocked with abandon and featured the familiar, glorious Nicks/Buckingham harmonies. It was also endearing to see the two former lovers walk on stage holding hands. Fleetwood Mac will return to Massachusetts on June 21, at Mansfield’s Comcast Center. By then, the heavy hearts of the band and its Boston Strong fans should be less dark. Don’t stop thinking about tomorrow, indeed.

Two songs into Thursday’s Fleetwood Mac concert, Stevie Nicks related a conversation she once had with her mother. What could she do to help, Nicks asked, in hard times? Her mother’s response: Sing. A simplistic solution, perhaps, but mere days after the Marathon bombing (and hours before the chaotic manhunt for the suspects would shut the city down), 2½ hours of music seemed to serve the near-sellout TD Garden crowd just fine.

In that time, Fleetwood Mac (who swing back around to the Comcast Center on June 21) covered quite a bit of ground: hits, a told-you-so segment focused on the once-misunderstood/now-cultishly-adored “Tusk,” a song that so predated Nicks’s and Lindsey Buckingham’s Mac days that they’d forgotten about it until stumbling across the demo on YouTube and a new song. And more hits. So many hits.

And only one of them — the optimistic “Don’t Stop,” inevitable even before the week’s events — by Christine McVie, who hamstrung the set list by having annoyingly left the band 15 years ago. But it was hard to know what would have been cut to make room for her. Buckingham spat through the clamorous new wave garage rock of “Not That Funny” with vigor and rode out the pained, lumbering “I’m So Afraid” with an increasingly intense guitar solo. “Sara” found Nicks singing to Buckingham, then taking his microphone before peeling off into a small but sweet dance with him.

Save for the riff setting up the coda of “The Chain,” bassist John McVie did all he could to avoid calling attention to himself. Mick Fleetwood took a drum solo during “World Turning,” but he hardly needed it; the off-kilter thumps pushing each song forward and the fervor with which he attacked them were spotlight enough. He seemed to know it, too, capping a ferocious “Tusk” — its glowering paranoia writ arena-sized — by leaping to his feet and throwing his arms into the air.

But songs like that one, “Big Love,” and “Gold Dust Woman” notwithstanding, Fleetwood Mac wasn’t just about tension. Buckingham and Nicks harmonized ebulliently on the chorus of the fine, upbeat new “Sad Angel,” while the rolling drums gave “Eyes of the World” a headlong drive. And the elegiac “Silver Springs” helped draw the show to a close with its slow rise and reset, and slow rise again. As Fleetwood Mac knows quite well, singing together can get people through plenty of difficulty.

BOSTON - Boston has been a city on edge, but Fleetwood Mac helped to take the edge off with a dazzling 2 1/2-hour show at the TD Garden on Thursday night.

While officers in a regional response team stood ready with assault rifles outside the venue in the wake of the Boston Marathon explosions, the legendary pop/rock group charmed a packed house of fans - mostly of the middle-aged variety - inside the Garden.

The group's 23-song show mixed classic hits with lesser-known material and two new songs off a forthcoming EP.
There were the time-tested Mac standards, including "Don't Stop," "Dreams" and the title track off of "Tusk," the 1979 album that subverted the formula of its wildly successful predecessor "Rumours," which has sold more than 45 million copies worldwide.

And there were the less typical live numbers, including "Not That Funny," a gorgeous "Sara" and the dark, moody "Sisters of the Moon."

This is the group's first tour in three years (they're set to return to the area on June 21 at the Comcast Center, and tickets are still available), but their sound remains crisp and their chemistry electric.

Fleetwood is the dependable yet zany drummer, and his solo during "World Turning" put the 65-year-old's youthful spirit on display. John McVie remains stoic on bass, taking the spotlight during rare but key moments, such as the sinewy interlude during "The Chain."

Lindsey Buckingham is the group's glue - Fleetwood called him "our mentor, our inspiration."

The singer/songwriter and guitarist performed masterfully throughout the night, especially on the acoustic stunner "Big Love" and a powerful "I'm So Afraid," which drew a standing ovation. He seemed almost as excited as the crowd at the end of songs, shouting and fist-pumping like he'd just won a competition, gray hair the only sign of his age.

After the second encore, just before leaving the stage, Nicks called Boston "one of the strongest cities in the world."

"You're tough," she said. "You'll get through this, and next year your fantastic race will be run, like always."

LANDSLIDE:
GOLD DUST WOMAN:
THE CHAIN:
SISTERS OF THE MOON:
Unfortunately, the audio is a bit distored, visually it looks great and Stevie rocks on this... Check out more from this youtuber DGB519 here 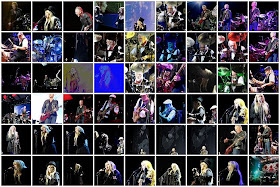 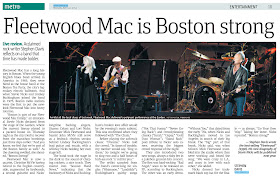 More Video From The Show
Nickslive at Saturday, April 20, 2013
Share