REVIEW: Stevie Nicks 'In Your Dreams' "this isn't a portrait of the artist, it’s a diary of the art" 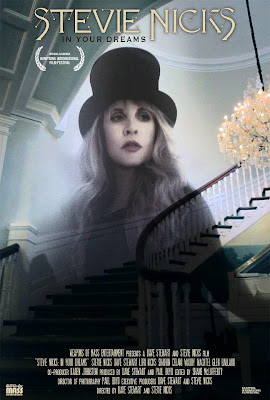 Movie review: In Your Dreams
by Jay Stone
O.Canada.com


Fans of the singer Stevie Nicks — none of whom could possibly be bigger fans than Stevie Nicks herself, it appears — will be in heaven with In Your Dreams, a documentary about the yearlong project to record her 2011 solo album. It’s all there: the inspirations, the moments of musical serendipity, the day Reese Witherspoon dropped by and gave her a title for one of the tunes, the many, many scenes of Nicks writing or singing or talking or just hanging out in her lush California home, being artistic.

Other, lesser fans will have to make do with serendipitous moments of our own: the voice-over when Nicks

expresses the wish that In Your Dreams will inspire younger audiences “to go back to the old ways and start over. This is our prayer.” Or the magical moment when, after writing the lyrics to Italian Summer at a hotel in Italy, she gives the hand-written manuscript to the front desk clerk and tells him, “Some day this is going to be very important.”

In fact, Italian Summer is a good song, one of many we get to enjoy in excerpts from the music videos that also festoon this vanity project. The film, like the album, is produced by Nicks and Dave Stewart, the Eurythmics guitarist, who joins Nicks and several other top-notch musicians. These include Mick Fleetwood and Lindsey Buckingham of Fleetwood Mac, the alma mater for Nicks, plus her longtime backup singers, in whom, she speculates, the public finds “comfort in that love that we have as three very strong women.”

And maybe they do. In Your Dreams features endorsements from members of the public, including an American sailor whose life was altered by Soldier’s Angel. Nicks wrote that song after touring Walter Reed National Military Medical Center and seeing the wounded warriors, one of a few genuine moments of emotion in the film. In Your Dreams would be impossible if it wasn’t for the fact that Nicks — whose throaty growl hasn’t lost much of its power — is a talented rock singer and Stewart is, as she informs us, “one of the greatest and grandest guitar players.”

The film only touches on her childhood and early career: this isn’t a portrait of the artist, it’s a diary of the art, including the volumes of her writings that she gave to Stewart as possible lyrics (at one point she compares herself to Bob Dylan). There’s a touching reminiscence surrounding the song New Orleans, written six days after Hurricane Katrina and inspired by TV clips of a young boy who looks at the camera and — with shocking and moving frankness — says, “We just need some help sent here. And it’s just pitiful.”

The Witherspoon song comes when the actress tells Stewart he can stay at her condo in Nashville. “It’s cheaper than free,” she says, and the next thing you know, Stewart and Nicks have turned that idea into a love song. Another factoid: Lady From the Mountain was inspired by the Twilight movie New Moon, in particular the part where Bella is abandoned by the love of her life, which also happened to Nicks. Hopefully, she says, someone will hear that song and think, “The same thing happened to Stevie Nicks and she’s still alive.”

In your dreams. OK, OK. But she started it. 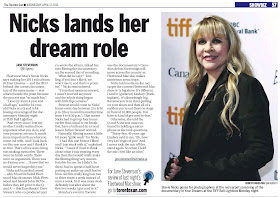 In Toronto on April 15th at The Toronto International Film Festival Lightbox Theatre Screening - Stevie screened the film and appeared after each screening for a live discussion and Q&A.  Here's one of those sessions captured and generously shared by Tmakworld.com Thanks for filming the Q&A!