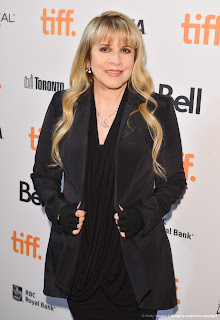 Toward the end of "In Your Dreams," Stevie Nicks and Dave Stewart's documentary about the making of their album of the same name which opened at Toronto's TIFF Bell Lightbox last night, Stewart muses about the magic that he experienced in that year of writing and recording with the rock 'n' roll legend and his hopes that a piece of that comes across in the film.

"I hope it brought you a little closer to Stevie's heart," he says in his closing narration.

The film certainly lives up to Stewart's expectations. The result of the producer and former Eurythmics member's almost obsessive need to film and document everything in his life, "In Your Dreams" takes viewers deep into the year-long creative process behind Nicks's 2011 album -- her first solo release in over a decade -- and just as deep into the heart of its co-writer and co-director.

With his omnipresent camera essentially becoming part of the gang, Stewart documents almost every detail of what happened from the time that Nicks asked him to produce her new album to the assembly of her band and crew (including superstar producer Glen Ballard and her Fleetwood Mac bandmates Mick Fleetwood and Lindsey Buckingham) to the videos the crew made to accompany each song on the disc.

Obviously comfortable with her creative partner, Nicks opens up about almost everything. Her family, her early music history, her sometimes rocky history with Buckingham, and her current inspirations are all covered. She even waxes poetically on her love of the "Twilight" films, which were the inspiration for the song "Moonlight (A Vampire's Dream).

"I was taken with this movie because what happened to Bella absolutely happened to me," she says about Bella's post-Edward heartbreak in "New Moon."

The result of this intimate and open atmosphere is a documentary that actually does make you feel like you're part of the action, as cliched as that phrase may be. And, as it turns out, the film was only really the opening act for people who attended one of the two screenings and Stevie Nicks Q&As last night. In the flesh, the rock star was even more personable and charming.

Clad in one of her trademark flowing outfits, Nicks amiably sauntered on stage after the screening, settled into her seat and started regaling the sold out crowd with a story about the genesis of the "In Your Dreams" film, and how her own personal insecurities almost destroyed the project before it even began.

Stewart, she explained, original brought up the idea of filming the whole process when he first agreed to produce the album for her. Nicks wasn't big on the idea, as it stood in the way of all of dreams of recording and home and dressing as a complete slob.

"That means serious hair, makeup and clothes," she said, in mock horror.

In the end, though, it was "Running Down a Dream," the 2007 Tom Petty documentary, that convinced her to give the camera a shot.

"I remember the footage from Tom Petty's very, very long four-hour documentary, which I personally loved, every minute of it," she said. "But there was a part on the Traveling Wilburys that was so brilliant and it really showed the five of those guys like they were in the James Gang or something. And we got to see them for a half-hour really be who they were and just looking so handsome and playing this amazing music and then, within minutes, it seemed, two of them died. And if they hadn't have done that, what a shame that would have been."
Nickslive at Tuesday, April 16, 2013
Share