Video: Stevie Nicks talks "In Your Dreams" at #Toronto Premiere ahead of Fleetwood Mac gig

Singer Stevie Nicks walked the red carpet in Toronto on Monday for the Canadian premiere of her new documentary In Your Dreams.
CBC Arts and Entertainment 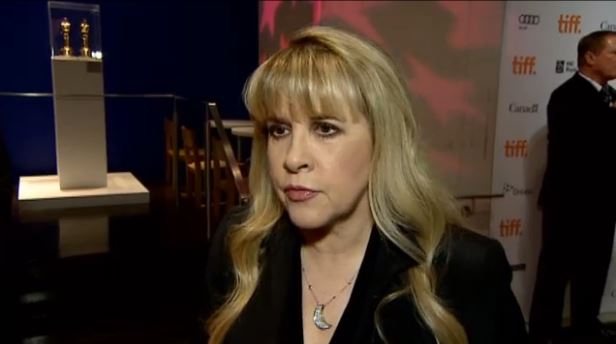 With Fleetwood Mac bandmates Mick Fleetwood and John McVie in the audience in advance of a concert by the band Tuesday, Nicks answered questions about making the documentary.

She produced and co-directed In Your Dreams with Dave Stewart (of Eurythmics fame), welcoming cameras into her California home for nearly a year while they wrote and recorded the 2011 album of the same name.

She told CBC News having creative control over the documentary allowed her the freedom to relax, despite the constant presence of cameras.

“The camera was this close and you wouldn’t care because it was Dave, because you know he promised you that he would never use anything unless you liked it,” she said.

A rock ‘n roll survivor, she describes Fleetwood Mac’s rise to fame and its off-on history since the 1970s. But the bulk of film is devoted to the creative process, as she and Stewart work on new songs and hash out how to shape the sound.

The cameras captured “the writing of seven of the songs. Nobody ever gets that,” Nicks said in an interview with CBC’s Zulekha Nathoo.

She toured for two years in support of the solo album, but Nicks said she sold only 300,000 copies, a disappointment after the stardom she enjoyed with Fleetwood Mac's 1977 album Rumours.

"It's such a different age now."

Nicks also mentioned an idea Stewart has been trying to get her to embrace – a one-woman stage show along the lines of Barbra Streisand’s My Name is Barbra.

"He wants me to have video screens, like a big room of video screens where it's all my whole life (up there). And I (said): 'Dave, I'm not Barbra Streisand'," Nicks said. "But maybe. Maybe someday."

Fleetwood Mac plays Tuesday at the Air Canada Centre in Toronto as part of a 34-city tour. In Your Dreams screens until April 18 in Toronto.

The lead singer of Fleetwood Mac has just released a new documenatry “In Your Dreams” that tells the story of Fleetwood Mac and Stevie Nicks’ inner life. Nicks walked the red carpet at the TIFF Bell Lightbox in Toronto on Monday night. She said this documentary is a little different.  Stevie was also asked about the Boston explosions. 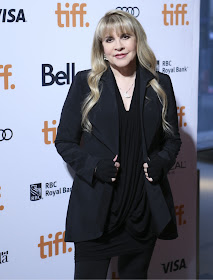 
The scene: A screening of Stevie Nicks’ documentary film, In Your Dreams, followed by an intimate Q&A with the chanteuse. Fangirls and boys—in eager, nervous numbers—sell out two consecutive screenings to be among the first to see the footage and interact with Nicks.

The story: Nicks teamed up with pal Dave Stewart, of Eurythmics fame, to chronicle the recording of her seventh studio album. The duo holed up in Nicks’ empty mansion with a group of musicians, including producer Glenn Ballard, throughout much of 2010 to record the album. The doc offers both insight into the songwriting process and the stories behind each track, which serve as neat divisions in the film’s narrative. There’s also a retrospective of Stevie’s childhood and career, focusing on her rise to fame, the important relationships with bandmates and family that shaped her, as well as glimpses into her intense emotions regarding current events, from 9/11 to Hurricane Katrina.

The takeaway: Nicks, who turns 65 on May 26, feels as young and alive as ever, invigorated by the people in her life and the music she is making. She does it because she wants to “defy” the music business to remind the audience “why [she] loved it back in the day.” In Your Dreams isn’t without its quirks: odd, staged performances of the album’s tracks that feel like one part music video, one part accidental LSD trip. Stevie leading a horse, singing. Stevie holding an owl, singing. Visiting an army hospital. In a ball gown, down the stairs, singing. A vampire playing a piano. Yes, it’s all beautiful and bizarre, yet so wonderfully in tune with her musical majesty.

So what do we learn about Nicks from her self-portrait?

We learn the track “Moonlight (A Vampire’s Dream)” was inspired by Twilight: New Moon, which Nicks saw in Australia and immediately related to Bella so deeply that she “just started to cry from the deepest part of [her] heart.” We learn Reese Witherspoon would play her in a movie and inspired/named the song “Cheaper Than Free,” one of Nicks’ all-time favourites. We learned that Stevie doesn’t “like to be told what to do.” Naturally. Nicks’ Q&A, then, is the epilogue to In Your Dreams, as both a film and an album, as she discusses her ambitious promotional schedule—because the “record company won’t help”—and about her desire to introduce loyal audiences to new material. Her responses are heavy-handed, with details so crisp and clear, spoken like a true poet. Nicks articulates exactly what she wants you to feel, and illustrates the internal journeys that bring her to her realizations. She speaks her brand of carefully-crafted wisdom.

Best outfit: A tie! Nicks, in all black, with fingerless leather gloves and a crescent moon necklace. Or her mini-me fan from the future, in a floral crown, peasant top, and flowing cotton skirt.

Number of times the audience howls and claps after Nicks answers a question: 4

Number of times an audience member screams “I love you”: 1

Number of audience members who cried on the mic: 1, after Nicks shares an intimate confession on the regret of not knowing enough about her mother’s life before she passed away at the end of 2011.

Number of chiffon blouses Nicks claims to own: “About 300”

On making In Your Dreams, the documentary: “If you would had asked us then if we were making a movie, we would have started giggling, ‘Are you crazy? We’re not making a movie.’ We were just filming because Dave [Stewart] likes to film.”

On recording In Your Dreams, the album: “It was like this amazing old English party every single day, and, on top of that, we were making amazing music.”

On being inspired by the four-hour-long documentary, Tom Petty and the Heartbreakers: Runnin’ Down a Dream, and vanity: “It seemed like within minutes [of Dream], two of the guys died. And if they hadn’t [made that movie], what a shame that would have been. So that’s what came into my head: What a shame would it be if you, Ms. Vanity, said no to this because you don’t want to spend half an hour doing makeup and picking a uniform.”

Her dad’s advice: “Stevie, go where the work is.”

On recording Rumours: “Well, it wasn’t really a pleasant experience. Lindsey and I had just broken up. None of the couples were happy. On one hand, this really lends to the creative process…it was not a lot of fun. But I would like to remind people, and myself, that it was a very, very romantic time. We were young and we were totally rich. Love was in the air, even if we weren’t particularly in love, it was still in the air. It was grand. Would you call it the happiest year of your life? No. But would you call it an extremely interesting, weird, passionate, crazy year? Yes.”

On selling records, then and now: “For a big act…like moi…I didn’t sell a lot of records [of In Your Dreams].

Worldwide, I probably only sold 300,000 records [estimates report 500,000]. It’s awesome if you’re an unknown artist and you have a hit single. But it’s not really awesome if you’re Stevie Nicks and [1981's solo debut] Bella Donna sold three million copies in the first month and went straight to number one on Billboard. It’s not awesome in that way, but you can’t look at it like that anymore. Records don’t sell like that. If we had done Rumours now, and then [the follow-up] Tusk, the double album, Warner Brothers would tell us to get out—and take your African tusks with you.” [Audience laughs] “Seriously.”

Comparing the vibe of her solo shows to those of Fleetwood Mac: “In my show, I talk a lot. In Fleetwood Mac, I don’t talk a lot because [that show] is much more sophisticated and grown-up. My show is just a big, like, slumber party in an auditorium.”

On Girl Power: “When I joined Fleetwood Mac, Christine [McVie] and had many talks. I said to her, “You and me together are a force of nature. We’re pretty tough by ourselves, but together we can’t be beat. I just want to let you know that I don’t ever want you and I to ever be treated like second class citizens. We will never be pushed aside in a group of British and American rock stars that are men. We will never be treated like that. And we weren’t. Had we not demanded it, we wouldn’t have gotten that kind of treatment.”

The experience in 140 characters or less: “I can die now. #stevienicksforever”