REVIEW: A Defiant Fleetwood Mac Lights Up The Night In Boston 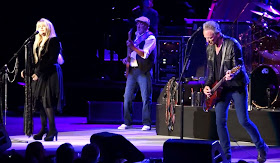 Fleetwood Mac held its first concert in Boston since 2009 last Thursday at TD Garden, and effects from Monday’s events could still be felt as concertgoers entered the building. Attendees faced increased security checks and ushers waved flyers printed with the suspects’ faces as they scanned tickets. It all led to the question: Is there a place for music in all of this? The band’s answer to this was a defiant “yes,” as Fleetwood Mac rose to the occasion and put on a powerful concert that was highly appreciated by the nearly sold-out crowd. Lead singer Stevie Nicks summed it up best in her early remarks to the crowd:

“When I used to run into hard times I’d ask my mom, ‘What do I do?’ And she’d say ‘You can sing for them, you can give them music.’ So that’s what we’re going to do for you tonight.”

And sing they did. Fleetwood Mac’s commitment to delivering that night for Boston was evident from the concert’s opening one-two punch of “Second Hand News” into “The Chain.” Drummer Mick Fleetwood kicked off the evening playing the song’s drum intro with a manic energy, leading into a jubilant rendition of the opener from the band’s classic “Rumors” (1977). The energy level remained high with the band firing on all cylinders for “The Chain,” displaying all the impressive aspects about Thursday’s concert, with harmonizing between Buckingham and Nicks, impressive guitar-work by Buckingham and a rock-solid rhythm section — John McVie’s iconic bass riff on the track rumbled and shook the building.

As to be expected, with no recent album to promote, though the band played two new tracks from an upcoming EP, the setlist was quite heavy on material from “Rumors.” One of the most pleasant surprises of the evening, however, was a mini-set devoted to “Tusk” (1979), the band’s underrated “Rumors” follow-up. Buckingham kicked off this portion of the concert with energetic takes on “Not That Funny” and the title track, which allowed for an impressive display of his trademark fingerpicking guitar style.

But what was easily the highlight of the “Tusk” mini-set was Stevie Nicks’ haunting take on the gem “Sisters of the Moon,” a song that hasn’t been performed by Fleetwood Mac in over 30 years. While Nicks’ voice has lost some of its range due to age, she knew her limits and played it to her advantage, giving “Sisters” a brooding quality. Nicks was spot on in many of her signature songs throughout the night, with highlights including a beautiful version of “Dreams” and a powerful take on “Gold Dust Woman.”

The other MVP of the night was Buckingham on guitar, who had as many show-stopping moments as Nicks. The peak of Buckingham’s performance came in an incendiary 10-minute performance of “I’m So Afraid,” with Buckingham letting loose a passionate guitar solo that brought on a standing ovation once the song was finished. Buckingham performed with this passion throughout the night, coloring many of the concert’s songs with inventive playing, such as his impressive solo acoustic take on “Big Love.”

Regarding Buckingham and Nicks, many in attendance were there to see the chemistry between the former partners. The history between the two has been a theme throughout Fleetwood Mac’s career, and Thursday’s concert offered a glimpse at a pair that finally seemed to be getting along. This relationship was best reflected in the evening’s final encore, where a beautiful rendition by Nicks of “Silver Springs” led into “Say Goodbye,” leaving the two alone on stage and giving a sense of closure to the evening.

Despite any reservations about holding a concert so soon after the Boston Marathon, Fleetwood Mac delivered in spades and provided those in the crowd a brief respite from the tension that had filled the week, with a concert marked by many emotional moments. While dedicating a song to a wounded Iraq veteran in the crowd who Nicks had met many years ago, she became visibly teary and choked up as she said the final words of her intro.

“And that’s what your city does, they called him back [to life]. I would want to be in this city.…I love this city.”
And with that Nicks went on to perform a perfect rendition of “Landslide,” leaving many members of the audience in tears as they sang along. This moment showed why Thursday night was more than just a concert; it showed the power of music to uplift, even in the face of something as horrific as Monday’s events. And based on their wildly enthusiastic reaction to a triumphant version of “Don’t Stop,” dedicated to Boston, it seemed like the crowd agreed.