REVIEW: Fleetwood Mac “We throw it out to you and then you throw it back to us. That’s the magic.”

Fleetwood Mac – Still Great After All Those Years
by MJ Hanley-Goff
Womanaroundtown.com

Whatever the players of Fleetwood Mac are having, I want some of that. The enduring rock and roll/pop band played to an appreciative full house (pun intended) at the Mohegan Sun Casino Arena in Montville, Connecticut on Saturday night. Between them, the four 60-something players, Stevie Nicks, John McVie, Lindsey Buckingham, and Mick Fleetwood, total 250-plus years… young. And “young” is most certainly the optimum word here. 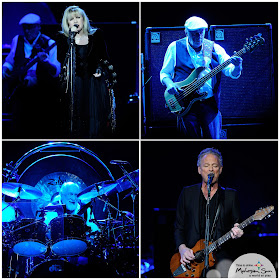 For close to 2½ hours, without an intermission (just a few quick disappearances during another member’s solo), the band played a remarkable set of their best of the best. Stevie began the night with a welcome to the fans who erupted in approval at her promise to “let you forget your troubles” for the next few hours. And from then on, there was no stopping them. I can’t think of one song of their repertoire of hits, (there was only one new song tossed into the mix, the rocker, “Sad Angel”), that they omitted, and each one was played with vitality and enthusiasm, a feat when you think of the thousands of times they’ve played them. Lindsey owned the stage with his quick-finger, guitar picking, and jumped and hollered, and panted when the song was done. The album Tusk, Lindsey explained, bewildered the music executives at the time, and continues as a reminder for Lindsey to not keep doing the same thing, that change is good.

Remembering that Stevie and Lindsey were a couple during the early years of the band, it was endearing to see them play off each other, glancing at one another when they each performed songs written for the other. Stevie sang an oldie, almost-forgotten song, “Without You” (she said the band truly had forgotten it, but it turned up on YouTube), and Lindsey, in return, replied with “Say Goodbye.” When Stevie was explaining the genesis of her song, she went on and on a bit, and then glanced at Lindsey and said, “Oh, I know, I’m rambling.” Still in grand gypsy form, Stevie danced, swayed and waved her capes and scarves around, at times playing air guitar and air piano. At one point, she led the audience along with her and Lindsey during the big favorite, “Silver Springs.”

Without a doubt, the highlight of the night came during Mick Fleetwood’s sweaty, non-stopping, pounding solo, and with the movie screen above him, he was bigger than life; eyes closed, he beat the drums and shouted, “Are you with me?” Of course we were. At one point Stevie addressed that fact, commenting that it was the audience who made the songs come alive. “We throw it out to you and then you throw it back to us. That’s the magic.”

Introduced as the “backbone of Fleetwood Mac,” a big nod goes to John McVie, the oldest of the bunch, most noticeably the least flamboyant, who wore his trademark vest and beret, and is still adding the back bass notes that take on a life of their own. (Give a listen to Tusk and you’ll see what I mean.) After three encores, it was easy to see that the audience wasn’t ready to let them go, and Fleetwood Mac didn’t want to leave, but finally, Stevie came to the mike and sent us off with a reminder to “always listen to music – it’s good for the soul.”
Nickslive at Monday, April 22, 2013
Share