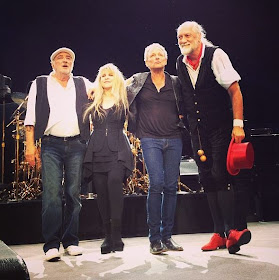 
It was billed as a Fleetwood Mac concert Saturday at the United Center, but it was really more about the California duo that Mick Fleetwood invited to join the band in 1974, Lindsey Buckingham and Stevie Nicks. 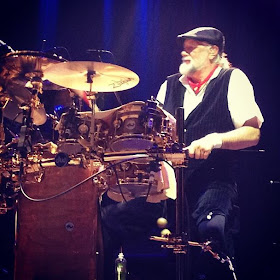 Lindsey and Stevie were the Jay-Z and Beyonce of the ‘70s. They were an under-achieving folk-rock duo transformed into a power couple with Fleetwood Mac, a core ingredient in three multimillion-selling albums that provided 15 of the 23 songs performed Saturday: “Fleetwood Mac” (1975), “Rumours” (1977) and “Tusk” (1979).

The concert turned into an extended dialogue between the two, with the rest of Mac’s membership – both current and past – reduced to ancillary roles. Buckingham and Nicks were more than just bandmates, of course, but lovers who broke up just as Fleetwood Mac broke big. That personal travail provided a subtext for countless songs, and the soap opera has continued to play out over the decades. Buckingham played hide-and-seek with the band while conducting a solo career, and he and Nicks appeared uneasy allies at best on recent tours. On Saturday, they were on cozier terms, and the songs and presentation underlined it. 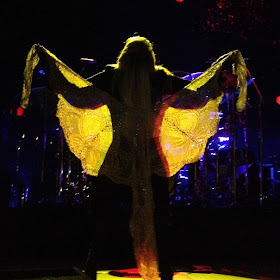 Fleetwood Mac has a rich history that reaches back to swinging London during the late ‘60s. The band was named after its rhythm section, which is still intact. Though he looks more than ever like he could be Fagin’s goofball sidekick in “Oliver Twist,” Mick Fleetwood remains an inventive drummer, steeped in blues but capable of coloring arrangements with orchestral flair. Hey, the man’s got a gong – and wind chimes! – and he knows how to use them. Band co-founder John McVie provided the bass breakdown in “The Chain,” a moment so iconic that it got an ovation from the capacity crowd. But even though Fleetwood got a drum solo, he and McVie were basically just part of the backing band on this night. 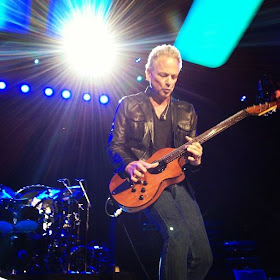 Another crucial player in the “Rumours” run written out of the script was Christine McVie, the U.K. keyboardist whose sultry hits were every bit as resonant as those of Nicks and Buckingham. But McVie retired in 1998, and her songs have been retired from the set list, with one exception – “Don’t Stop.”

It was that song that urged, “Don’t you look back, yesterday’s gone” – solid advice for most rock bands trying to remain relevant. Though the set was loaded with yesterday’s songs, Fleetwood Mac does have its own anti-nostalgia machine. Buckingham still plays like a guy looking for his first break. Only his gray hair betrayed any signs of aging. His voice remains pliable and strong, if slightly deranged in its most fevered moments. As a guitarist, he’s a finger-picker who can sound like he’s got four hands going at once, playing lead and rhythm lines simultaneously while mixing a grab-bag of influences – everything from bluegrass to hard rock. He described “Big Love” as a “meditation” on change, but this was more like an exorcism. He attacked his guitar as much as plucked it, a ferocious solo performance that was easily the night’s highlight.

Nicks took longer to warm to the occasion. Her range has narrowed and her register has lowered, and attempts to stretch out and talk-sing through “Rhiannon,” “Gold Dust Woman” and “Sara” turned these warhorses sludgy and slack. But when Fleetwood, McVie and several backing musicians and singers exited, Nicks had the stage to herself with Buckingham, and the intimacy and space in the arrangements suited her. “Landslide” finished with the duo clasping hands, and they resurrected “Without You,” a song from their pre-Mac days that allowed their voices to blend like the California-pop innocents they once were.

Buckingham responded to Nicks’ tune with one he wrote a decade ago about the couple, “Say Goodbye.” The guitarist even broke out the “c” word – “closure” – in describing his relationship with Nicks. Once again, the stage was empty except for the two singers as their public therapy session dissolved into darkness. Then they exited holding hands. 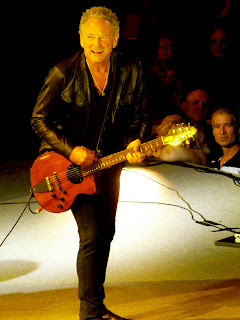 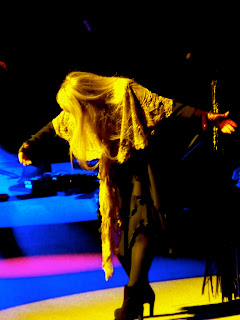 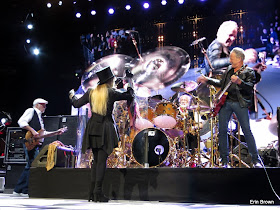 (Will be released on-line as part of Fleetwood Mac's new EP. Lindsey says in the video, it's a digital release first, then possibly a physical piece later)
LANDSLIDE