TORONTO - In the feature film about her life, Stevie Nicks wants Reese Witherspoon to play her.

This is one of many revelations found in In Your Dreams, the documentary about the making of Nicks’ 2011 solo album of the same name, co-directed by Eurythmics’ Dave Stewart, who also helmed the record with Glen Ballard. 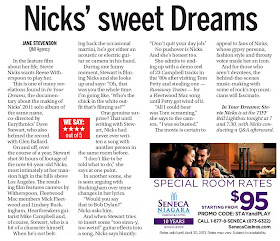 On and off, over the course of a year, Stewart shot 50 hours of footage of the now 64-year-old Nicks, most intimately at her mansion high in the hills above Los Angeles. The resulting film features cameos by Witherspoon, Fleetwood Mac members Mick Fleetwood and Lindsey Buckingham, Heartbreakers guitarist Mike Campbell and, of course, Stewart, who is a bit of a character himself.

When he’s not belting back the occasional martini, he’s got either an acoustic or electric guitar or camera in his hand.

During one funny moment, Stewart is filming Nicks and she looks up and says: “Oh, that was you the whole time. I’m going like, ‘Who’s the chick in the white outfit that’s filming us?’”

One genuine surprise? That until writing with Stewart, Nicks had never ever written a song with another person in the same room before.

“I don’t like to be told what to do,” she says at one point.

In another scene, she is seen arguing with Buckingham over tense changes in her lyrics. “Would you say that to Bob Dylan?” Nicks asks him.

And when Stewart tries to insert some “too siren-y, too weird” guitar effects into a song, Nicks says bluntly: “Don’t quit your day job.”

No pushover is Nicks. And she’s honest too.

She admits to ending up with a demo reel of 23 Campbell tracks in the ’80s after visiting Tom Petty and stealing one - Runaway Trains - for a Fleetwood Mac song until Petty got wind of it.

“All I could hear was Tom screaming,” she says to the camera. “I was so busted.”

The movie is certain to appeal to fans of Nicks, whose gypsy persona, fashion style and throaty voice made her an icon. And for those who aren't devotees, the behind-the-scenes music-making with some of rock’s top musicians will fascinate.

FILM | Stevie Nicks "In Your Dreams"

Singer/songwriter Steve Nicks, known from her association with the group Fleetwood Mac, will be present tonight at a special screening of the film, In Your Dreams, a documentary about the making of her 2011 album of the same name. This album was her first effort in ten years. A top notch cast of LA production and musical talent was enlisted to make it happen, led by Dave Stewart, a well-known producer whose career was launched back in the early '80s as part of the group The Eurythmics. The film follows the project from the writing process onwards, and also features biographical passages, and footage from Nick's childhood and career.

In Your Dreams: Stevie Nicks is at the TIFF Bell Lightbox tonight at 7 and 7:30, with Nicks conducting a Q&A afterward.

Sweet dreams — musically anyway — are made of this. 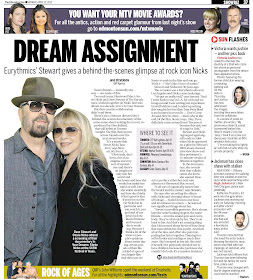 Two rock icons, Fleetwood Mac’s Stevie Nicks and Dave Stewart of The Eurythmics, worked together on Nicks’ first solo album in a decade, 2011’s In Your Dreams.

But their creative collaboration didn't end there.

There’s also a Stewart-directed 2013 behind- the-scenes documentary of the same name about making the record, co-produced by Glen Ballard, that will debut in Toronto Monday night. The film then moves across Canada over the next several weeks. 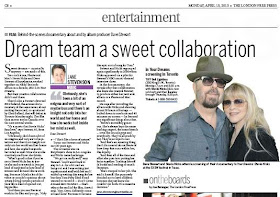 “Obviously, she’s been a bit of an enigma and very sort of mysterious and there’s an insight not only into her world and her home and how she works but inside her mind as well. How she works creatively and how she thinks. What’s good is that if you’re not a Stevie Nicks fan in particular and you watch it, you get kind of surprised at how kind of intense and focused she is working. Because I think a lot of the views or people’s opinions about artists during certain periods of their life is kind of spaced out, hippie like. And then you see Stevie at work in the film and you go, ‘Holy s---!’ She’s like a force of nature.”

Turns out Stewart and Nicks met 30 years ago.

The occasion was an Eurythmics show in Los Angeles and Nicks came backstage.

“We got on really well,” says Stewart. “And I went back to stay in L.A. for a bit and we hung out and I was writing just experimental stuff with her and I ended up writing this song for her but then Tom Petty liked it and wanted to record it — Don’t Come Around Here No More — that’s why at the end (of the film, Stevie) says, ‘ Hey, Dave, definitely come around here!’ Because it became this epic sort of song for Tom.”

Stewart and Nicks regrouped again significantly in 2006 when Nicks appeared on a pilot for Stewart’s HBO music- themed interview show. In the documentary, she reveals after that collaboration she knew she wanted Stewart to produce either her next solo album or a Fleetwood Mac record.

He says after recording the album with Nicks and shooting about 50 hours of footage — boiled down to one hour and 40 minutes on-screen — he learned two significant things about her.

“Stevie’s incredibly generous. She’s always kept the same backing singers, the same friends ... even the sounds guys and everybody. They've all stuck by her. They’re so loyal to her. And that’s an amazing thing that I discovered about Stevie of how deep that runs within her, this loyalty. And then all of the time and effort she puts into putting her lyrics together. Training herself in books and reading so much literature. She’s steeped in her job. She said it herself. She purposely decided not to have children because she just knew she couldn't do both. It’s a massive decision.”
Nickslive at Monday, April 15, 2013
Share