REVIEWS: "Angular and propulsive, “Miss Fantasy” has the nervy attitude of Buckingham’s best tracks on the sprawling Tusk" 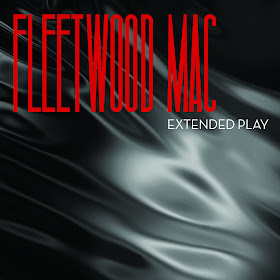 
The last time Fleetwood Mac made an album together, they were minus Christine McVie and enough good songs to fill its 75-minute running length. They’re still without McVie on their new four-song EP, but they fixed ‘Say You Will’’s biggest problem by keeping ‘Extended Play’ at an economical 17 minutes. And if it sounds more like a Lindsey Buckingham record than an actual band one at times, at least ‘Extended Play’ is the best thing released under the Fleetwood Mac moniker since 1987’s ‘Tango in the Night.’

In fact, ‘Extended Play,’ which is available exclusively on iTunes, sounds a lot like Buckingham’s recent solo albums, but with a punchier rhythm section and Stevie Nicks’ backing vocals. All of which give the music way more life than if Buckingham – whose insular approach to his solo records often make them sound thin and narrow – would have recorded them himself.

The opening ‘Sad Angel,’ propelled by acoustic guitar and a killer hook, crackles with more energy than anything the band or Buckingham, who wrote and sings lead on all but one of the EP’s four tracks, has done in years. It doesn’t hurt that Nicks and Buckingham still make a great singing team, chiming in on the choruses like it’s 1977 again. The song is the highlight of ‘Extended Play’ and its only real uptempo track.

But the remaining three songs are almost as good, especially the closing ‘Miss Fantasy,’ a shuffling pop number featuring a whispered vocal by Buckingham, with Nicks pushing along the choruses. The hushed piano ballad ‘It Takes Time’ is mostly Buckingham until the final minute, when strings swell around the spare melody. And Nicks and Buckingham share lead vocals on ‘Without You,’ a leftover cut from the pair’s pre-Fleetwood Mac duo days written by Nicks.

Fleetwood Mac have been performing a couple of the songs on their current tour, so in a way, ‘Extended Play’ doubles as a show souvenir for fans wanting new material from the band. It’s not essential Mac by any means, but after all these years, and all these years apart, it’s nice to know that they’re still capable of making some sweet music together.


The center point of this new Fleetwood Mac EP is a track thought lost from the Buckingham-Nicks era, a song that once might have just been about being in love but now billows with a very mature sense of acceptance.

“Without You,” presented again as a stripped-down pairing, peels away the recriminations of “Go Your Own Way,” the sad laments of “Dreams,” the lost years when they couldn’t speak to one another, much less work together. What’s left is a friendship forged through a shared history in music, a creative endeavor that Lindsey Buckingham and Stevie Nicks can do apart but, yet, always seems more fully formed, more complete, when they are together.

Who can blame Mick Fleetwood, then trying to transition Fleetwood Mac from its first life as a blues-rock outfit, for snapping these two up? Now back on tour, though alas again without Christine McVie, they’ve released a zippy four-song cycle that certainly cures the biggest problem with their overstuffed most recent effort Say You Will, a 2003 long player that went way too long.

None of it will make you put Rumours aside but there’s a renewed spark to Extended Play — available now through iTunes — that’s been missing forever. “It Takes Time,” for instance, finds Buckingham in a darkly contemplative mood, whispering over a ruminative piano figure — vulnerable in a way that he never could be with Fleetwood Mac back at their commercial zenith. As he looks back, the track makes stark admissions about the mistakes we only see after a relationship is over.

Angular and propulsive, “Miss Fantasy” has the nervy attitude of Buckingham’s best tracks on the sprawling Tusk, and may be the most perfect pop song Fleetwood Mac has completed since the sad departure of McVie — who always served as a leavening element in the torrid emotional script being written between the ex-lovers Nicks and Buckingham.

“Sad Angel” begins with a staccato guitar signature, as Buckingham launches into one of his patented hurtful yodels, only to be joined by a completely reinvigorated Nicks. Despite its plaintive title, however, this thing rocks — with a muscular rhythmic counterpoint from Fleetwood and John McVie, and one of Buckingham’s most propulsive solos since “Holiday Road,” back in 1983.

Earlier today (April 30), Fleetwood Mac released a four-song EP, ‘Extended Play,’ their first new studio material since 2003′s ‘Say You Will.’ While the EP is available for purchase exclusively at iTunes, you can stream the lead track and first single, ‘Sad Angel,’ below.

Written by Lindsey Buckingham, ‘Sad Angel’ opens with some typically kinetic, percussive Buckingham rhythm guitar before his vocals come in, and joined later by the whole band. The rhythm section of John McVie and Mick Fleetwood chug along in typical no-nonsense, muscular fashion, with some keyboards and a few layers of guitars to fill it out.

Even though she sings in tandem with Buckingham for all but the opening 15 seconds, Stevie Nicks is largely invisible. She takes her lines well and the two still blend together very well, but there’s little of her trademark personality on display. Maybe that’s a little harsh, but for a band that has traded so frequently on the duo’s history together, ‘Sad Angel’ doesn’t offer much in the way of tension between its two lead singers.

Not that that’s a bad thing, of course. Throughout the run-up to the release of ‘Extended Play,’ we’ve heard about how those past issues are behind them – note how they’re posed in the press photo above – so what better way to prove it than with a nice, poppy song that is, lyrically, light years removed from their famously autobiographical work.

Or is it? The ambiguous lyrics could be Buckingham acknowledging that he and Nicks need each other, and are never better than when they’re together. “We fall to Earth together / The crowd calling out for more / Hello, hello sad angel / Have you come to fight the war?” they sing in the chorus. It’s hard to tell, because we usually associate Nicks with gypsies or witches, not angels.

If ‘Sad Angel’ is about her, then it’s a nice peace offering as the two of them prepare to write the newest chapter in their incredibly long history together. If not, then it’s still a welcome return to form for one of rock’s most enduring bands.