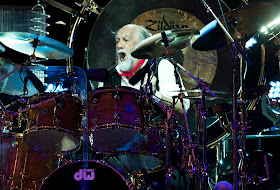 AM New York
by: Hal Bienstock


Fleetwood Mac’s “Rumours” is one of the 10 best-selling albums of all time. What keeps it fresh 35 years later is not only the music itself, but the stories behind the songs. The album was recorded as two couples — Lindsey Buckingham and Stevie Nicks, and John and Christine McVie — were in the process of breaking up, and the album reflects that tension and emotion. A deluxe edition of “Rumours” was recently reissued, complete with outtakes and live tracks.

amNY spoke with drummer Mick Fleetwood as the 2013 edition of the band — with John McVie, Buckingham and Nicks — got ready for a tour.

What do you think when you listen to “Rumours” today? I think it was a miracle we were able to make it because of all the stuff that was going on. I love it. It’s a complete piece of work. They were really well put together songs, then you have the whole dynamic and the story of “How the hell did that bunch of people survive the emotional journey they were on?”

Is there still pain when you play these songs? We remember all of it. It makes us reconnect to what was going on then, but we look at it from increasingly different angles. We’re all older and more forgiving. It’s not super, super painful. What it is now is super, super interesting.

Are you working on new music? There are two or three things we’re hoping to get on the Internet as an EP. … In my opinion, Lindsey’s songs are some of the best stuff he’s done. I’d love to think we could put some of Stevie’s stuff together with it, then we’d have another Fleetwood Mac album. That’s my little pipe dream.

There’s a perception that these days Fleetwood Mac is a business as much as a band. Is there any truth to that? I so don’t identify with that. For one thing, if we were running a business, we’d be working a lot more. Stevie and Lindsey have been in love since they were 16. ... There are some bands that made great music, but don’t give a s--- about each other. In truth, we care too much about each other. That flame is very much about to get to lit up again.