Their summer run Down Under follows their 40-date sell-out US tour which industry experts say has eclipsed the Rolling Stones 50th anniversary shows. 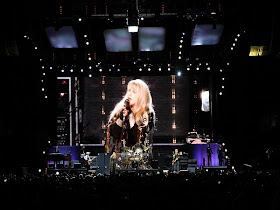 Fleetwood Mac singer Stevie Nicks told The Sunday Times: "I'm very excited for the Australian tour and can't wait to get there."

The band has strong ties to Australia.

Nicks thought the Outback might help beat her cocaine habit.

"It was either check into the Betty Ford clinic, or go to Australia and hang out in the desert with my close friend and martial expert Bob Jones and sweat it out," she said. "I rang Bob one night and he said, 'No worries, come over'.

But I ended up getting a spot at Betty Ford."

"I fell in love with Australia on one of the tours, found a place to live, and those days were incredibly crazy," he said.

"It fell apart over a five or six years period, so I didn't end up truly living there. I gave up my green card and fully intended to do this whole thing. In truth, it was too much too soon."

In a wide-ranging interview with The Sunday Times (HERE), Fleetwood revealed his bizarre list of tour superstitions and drug myths surrounding the band.

But he dismissed US industry reports Fleetwood Mac is thumping the Stones in ticket sales and positive reviews.

"I've heard those reports, too. But I know the lads have decided to go with very expensive seats," he said. "All I know is Fleetwood Mac has been incredibly blessed with a hugely successful tour. We always do good business, but this tour is pretty much sold out before we even got out on the road.

"That is very gratifying. But we should be so lucky to even open for the Rolling Stones."

Tickets go on sale to the general public June 13th, but American Express Cardmembers have the opportunity to purchase tickets first during an exclusive pre-sale beginning 12noon Tuesday June 4.