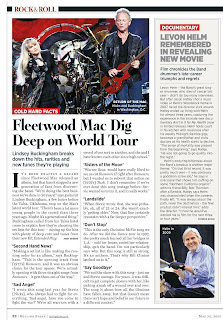 
It's been exactly a decade since Fleetwood Mac released an album, but that hasn't stopped a new generation of fans from discovering the band. "We're ding the best business we've done in 20 years!" says guitarist Lindsey buckingham, a few hours before the Tulsa, Oklahoma, stop on the Mac's latest world tour.  "There's been a lot more young people in the crowd than three years ago.  Maybe it's a generational thing."  Buckingham called from his Tulsa hotel room to explain how they're choosing the set lists for this tour - mixing up the hits with plenty of deep cuts and tunes frm their new EP, Extended Play. - Andy Greene
Nickslive at Saturday, May 11, 2013
Share