THE SOAP LEGENDS OF ROCK 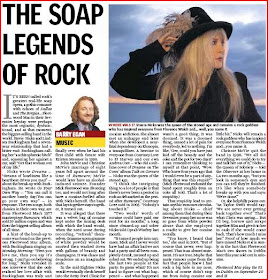 
IT'S BEEN called rock's greatest real-life soap opera, a gothic romance with echoes of Dallas and The Borgias... Fleetwood Mac in their Seventies heyday were perhaps the most orgiastic, dysfunctional, and at that moment, the biggest-selling band in the world. Stevie Nicks and Lindsey Buckingham had a seven year relationship that had a bitter end: Buckingham calling her “a schizophrenic bitch” and, squeezing her against a car, said “Get that woman out of my life.”

Nicks wrote Dreams — “dreams of loneliness like a heartbeat drives you mad” — about the break-up with Buckingham. He wrote Go Your Own Way — “You can call it another lonely day/You can go your own way” — in response. The two songs, both classics in their own way, are from Fleetwood Mac’s 1977 masterpiece Rumours, which sold 30 million copies and was then the biggest selling album of all time.

A hint of the break-up to come was found on the previous Fleetwood Mac album, with Buckingham singing on Monday Morning: “First you love me, then you say it's wrong. I can't go on believing for long.” Nicks revealed in one interview that she only realised her love affair with Buckingham was truly and finally over when he had his first child with future wife Kristen Messner in 1998.

John McVie and Christine McVie's marriage of eight years fell apart around the time of Rumours; McVie would later have an alcoholinduced seizure. Founder Mick Fleetwood was divorcing too, and would not long after have a cocaine-fuelled affair with Nicks herself. The band that lays together stays together, it turned out.

It was alleged that there was a velvet bag of cocaine kept under the mixing desk with which the band would, when the need arose during recording, “refresh” themselves. Gramme upon gramme of white powder would be snorted then washed down with gallons of brandy and champagne. It was chaos and decadence on an imaginable scale.

In the mid-Eighties Nicks would eventually check herself into the Betty Ford Clinic for cocaine addiction. She almost met an unhappy end later when she developed a nearfatal dependency on Klonopin, a tranquilliser. A heroine to everyone from Courtney Love to PJ Harvey and our own Andrea Corr — who did a sublime cover of Dreams on The Corrs' album Talk on Corners — Nicks was the queen of the stoned age.

“I think the intriguing thing to a lot of people is that there's never been a period in rock as debauched as the period after Rumours,” Courtney Love said in 2003. “Nobody's touched it.”

“Two weeks’ worth of cocaine could have paid our rent for six months,” a long since cleaned-up and sober Nicks told Oprah Winfrey last month.

“It turned people into nutcases. Mick and I never would have had an affair had we not had a party and all been completely drunk, messed up and coked out. We ended up being the last two people at the party. So guess what? It’s not hard to figure out what happened — and what happened wasn’t a good thing. It was doomed. It was a doomed thing, caused a lot of pain for everybody, led to nothing. I’m like, ‘Gee, could you have just laid off the brandy and the coke and the pot for two days?’ I can remember thinking to myself at that point, ‘Wow. Who knew four years ago that I would even be a part of anything that was this stupid?’” (Mick Fleetwood reckoned the band spent roughly $8m on coke all told. That's a lot of stupidity.)

That stupidity lead to certain mythic rumours circulating about Nicks — chief among them that during their Seventies pomp her nose was so gone from white powder abuse that she employed a roadie to give her cocaine rectally.

“You know, I heard that too,” she said in 2001. “But of course that never, ever happened. That is an absurd statement. It's not true. Maybe that nasty rumour came from the fact that people knew I had such a big hole in my nose, which of course didn't stop me from doing cocaine one little bit.” Nicks will remain a rock goddess who has inspired everyone from Florence Welch and…you name it.

Chrissie McVie quit the band in 1998. “We all did everything we could do to try and talk her out of it,” Nicks — the Queen of Sobriety — told the Observer at her home in LA two months ago, “but you look in someone's eyes and you can tell they're finished. It's like when somebody breaks up with you and says: ‘We're done’.”

Or, she helpfully points out: “As Taylor Swift would say: ‘ We are never ever getting back together ever!' That's what Chris was saying… But I'd beg, borrow and scrape together $5m and give it to her in cash if she would come back. That's how much I miss her.” Proof of how much we have missed Nicks et al is surely in the fact that Fleetwood Mac's two shows in Dublin later this year sold out in minutes. Fleetwood Mac play the 02 in Dublin on September 20 and 21
Nickslive at Sunday, May 19, 2013
Share