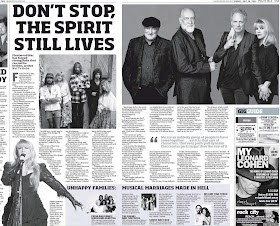 FLEETWOOD Mac epitomises the survival spirit. "We know how lucky we are," drummer Mick Fleetwood says. "But we're very serious about what we do. That's why were still here.

Of course, the back story, of break ups, make ups, and their insatiable drink and drug habits are as famous as the band itself.

Even Fleetwood admits it's a blessing they're still writing, recording, performing and touring stronger than ever.

But as Fleetwood reveals a list of rituals and superstitions he follows when the band tours, it's a miracle anybody made it to the stage.  "We are all creatures of habit," Fleetwood says. "I still do this thing where, if I'm in the toilet, I'll open the door a certain way, and flush it three times, and, if I haven't done it, I'll go back and do it.  "It used to be really bad, though," he says, laughing. "I would have, on my way to the stage, little things I'd left there.  "There was a penny which I'd pick up in the spot where I'd left it, and put in my pocket as I walked to the stage.  "But if any of that was upset or the coin disappeared, I would think: 'I'm cursed!' We were very superstitious."

Fleetwood says the drill also included drug use backstage - sometimes while they performed.

"In the old days, there was a definite routine of how we juggled our substances. We didn't like to walk on stage completely ... you know," he says, sheepishly.  "Did we? Yes. But not often. During the show, and after the show, is when the trouble started."

But Fleetwood's most powerful superstition while on the road is deeply personal.

"I won't get on a plane unless I have this," he says reaching into a supple leather bag, "my father's flying scarf."  His father was a Royal Air Force fighter pilot. Fleetwood keeps the scarf wrapped in a pouch.  "This puppy has been all over the world," Fleetwood says, handling the cargo delicately.  "I never get on a flight without it. The band wouldn't like to get on the plane if I didn't have dad's flying scarf. It keeps us safe."

An hour later, as superstars Fleetwood Mac perform to another full house on a 40-date sell-out US tour, it's clear they have another good luck charm: each other.

Fleetwood Mac is still at the height of its powers.

Stevie Nicks' voice is in career-best shape on hits including Dreams and Landslide, while Lindsey Buckingham, a freakish guitarist, sings raw and intense on the standout, Big Love.

The engine room of Fleetwood and bassist John McVie keeps the Mac hits steady, powering up on Tusk and The Chain.

The latter song vows: "Chain keep us together."

Backstage, before the show, Buckingham says those links are sometimes tenuous because of the strong personalities in the band.  "I'm not saying we don't belong in a band together," he says.  "I am saying we are an unlikely group of people to have come together. You see it on paper and ask: `Well, how's this gonna work?'  "Our tastes are quite disparate and yet it is that cast of characters, that very push-pull dynamic that creates parts larger than the sum of it."

Last month, Buckingham told Rolling Stone Magazine he wishes Fleetwood Mac would follow The Eagles model of doing business.  Asked to explain his comments, Buckingham told news.com: "(The Eagles) reputation is such that they don't get along.  "But somehow they're able to cut through that, do the business they're able to do, get done what they need to as a group, and see their way clear to the common objective. "That seems difficult for Fleetwood Mac.  "This band is something you might liken to a political minefield," he says quietly. "It needs to be navigated."

For now, the Mac are steering their way through good times. Buckingham wrote songs on their new EP, Extended Play, and they aim to make an album.

There are also plans to release a 40th anniversary version of Buckingham Nicks, the 1973 album Stevie and Lindsey made before joining Fleetwood Mac.

Indeed, the ghosts of their past love affair play out warmly in the new show, during a soft embrace in Sara, and touching fingertips in Landslide.

The audience is still enchanted by Stevie and Lindsey's long faded romance.  "By the time we got to Rumours," Buckingham says, "Stevie had both feet out the door. She left me.  "It was difficult to be the guy who had to go back to the studio, produce her songs, and make the choice to do the right thing for her professionally, even though it was painful to be around her personally.  "But what doesn't kill you makes you stronger.  "It's sweet that Stevie and I are somehow acknowledging that from a distance. I think people are quite intrigued by that, as we are too."

"The thing about my dynamic with Stevie become more the professional side of it," Buckingham says.  "Not to say we don't feel a great deal for each other, because it does play out in a very authentic way. But we are playing roles."

Today, 20-or-so years since they kicked their bad habits, those character parts don't include rock star cliches.  "We all know what we did - it's all public knowledge. A lot of cocaine and booze," Fleetwood says.  "But you have to put it in perspective. War stories become very romantic and they are fun to tell, but I certainly try to preface it by saying it's not recommended.  "You also don't want to aggrandise it too much and, yet, in truth, you have to tell the truth.  "We had a lot of great times, no doubt," he says.  "It certainly didn't seem to stunt the creative process. But it ended up becoming a drain on all of us. Then it became counter-productive.

"We are, quite frankly, fortunate to have prevailed," Fleetwood says. "We're lucky, we're grateful and we're here." 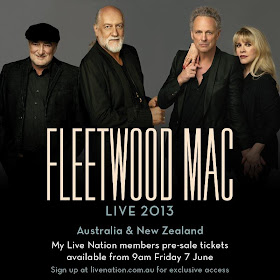 My Live Nation members can be among the first to access tickets during the exclusive presale beginning at 9.00am Friday June 7. Sign up at www.livenation.co.nz
Nickslive at Saturday, May 25, 2013
Share