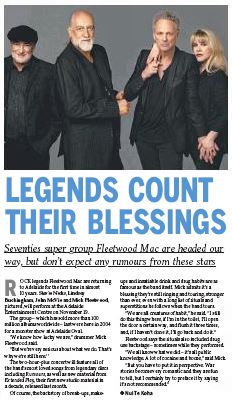 
Seventies super group Fleetwood Mac are headed our way, but don’t expect any rumours from these stars

The group – which has sold more than 100 million albums worldwide – last were here in 2004 for a monster show at Adelaide Oval.

"We know how lucky we are," drummer Mick Fleetwood said.
"But we’re very serious about what we do. That’s why we’re still here."

The two-hour-plus concert will feature all of the band’s most loved songs from legendary discs including Rumours, as well as new material from Extended Play, their first new studio material in a decade, released last month.

Of course, the backstory of break-ups, makeups and insatiable drink and drug habits are as famous as the band itself. Mick admits it’s a blessing they’re still singing and touring, stronger than ever, even with a long list of rituals and superstitions he follows when the band tours.

"We are all creatures of habit," he said. "I still do this thing where, if I’m in the toilet, I’ll open the door a certain way, and flush it three times, and, if I haven’t done it, I’ll go back and do it."

Fleetwood says the rituals also included drug use backstage – sometimes while they performed.

"We all know what we did – it’s all public knowledge. A lot of cocaine and booze," said Mick.
"But you have to put it in perspective. War stories become very romantic and they are fun to tell, but I certainly try to preface it by saying it’s not recommended."

Fleetwood Mac will be on tour in Australia November and December, 2013.