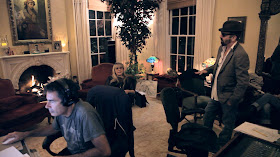 Only one showing of the film in Windsor on May 15th at the Capital Theatre.  Tickets are $9 for students and $13 for adults, and are available online at windsorfilmfestival.com or on the evening of the screening at the Capitol box office.

Regina is seeing a total of eight screenings of the film beginning on May 30th running through June 2nd.  That's huge!  Tickets will be available at the box office 45 minutes prior to the show.

The RPL Film Theatre is located inside Central Library, in the heart of downtown Regina, at 2311-12th Avenue between Lorne and Smith Street.

If you can't make the May 18th showing of the film in Vancouver at VIFF, well the Rio Theatre has you covered.  The Rio Theatre on Broadway in east Vancouver will be showing the film twice - one night only on June 10th at 7:00pm and 9:30pm.  Advance tickets will be available on-line to purchase through riotheatretickets.ca 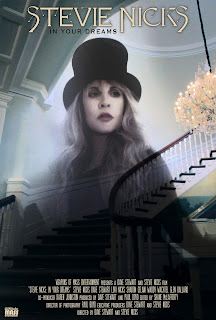 "Stevie Nicks: In Your Dreams" Documentary at the Rio Theatre
Vancouver Observer

Stevie Nicks: In Your Dreams is an intimate portrait of Stevie Nicks, the Grammy-winning artist and member of legendary rock band Fleetwood Mac, as she creates an album with Dave Stewart of Eurythmics fame. Co-produced and co-directed by Nicks and Stewart, the film goes behind the scenes as Nicks and Stewart embark on a musical journey to write and record the critically acclaimed album In Your Dreams.

Nicks, who is presently on a world tour with Fleetwood Mac, called this adventure "the greatest year of my life" and felt compelled to share the joyful experience that she terms "the day the circus came to town" with her fans. The album was written by Nicks and Stewart and produced by Stewart and Glen Ballard, the famed producer of Alanis Morissette's landmark album Jagged Little Pill. Ballard also appears in Stevie Nicks: In Your Dreams, along with Nicks' Fleetwood Mac band mates Lindsey Buckingham and Mick Fleetwood, and actress Reese Witherspoon.

Stevie Nicks: In Your Dreams premiered at The Landmark Theatre in Los Angeles on March 31, 2013, with Stevie Nicks introducing it and taking part in a Q&A. The film then had exclusive showings on April 2nd at theaters in more than 75 cities across the U.S. and Canada.

Virgil Films' Joe Amodei, who was recently named Film Festival Director of the music-focused CBGB Festival, said: "Stevie Nicks: In Your Dreams is that rarest of music documentaries, one that shows the artist actually in the process of creating new music as we watch and listen. To be working with a musical icon like Stevie Nicks is indeed a dream."

"Nicks is like a USB thumb drive in lace, a small package containing a variety of pop-culture personality tropes. She has been the regulator of weight; the titrator of substances; the veteran of a love triangle; the female artist who escaped the long shadow of a male collaborator; the commercial artist who passed through wildly different stations of commerce; and the canny performer whose utilitarian decisions and whimsical tastes became the totems and scripture of a tribe. She survived both the corrosive lift of cocaine and the lead apron of Klonopin." - The New Yorker