REVIEW | PHOTOS | VIDEO: Fleetwood Mac one of the greatest shows to ever hit Central Arkansas 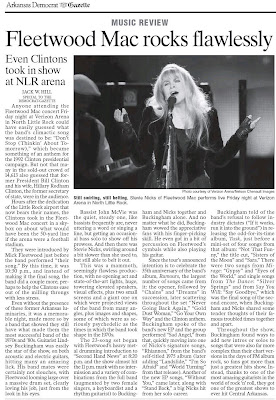 Even Clintons took in show at NLR arena


Anyone attending the Fleetwood Mac concert Friday night at Verizon Arena in North Little Rock could have easily guessed what the band’s climactic song was destined to be: “Don’t Stop (Thinkin’ About Tomorrow),” which became something of an anthem for the 1992 Clinton presidential campaign. But not that many in the sold-out crowd of 14,613 also guessed that former President Bill Clinton and his wife, Hillary Rodham Clinton, the former secretary of state, were in the audience.

Hours after the dedication of the Little Rock airport that now bears their names, the Clintons took in the Fleetwood Mac concert in a skybox on about what would have been the 50-yard line if the arena were a football stadium.

They were introduced by Mick Fleetwood just before the band performed “their song.” By this time, it was 10:30 p.m., and instead of making it the final song, the band did a couple more, perhaps to help the Clintons ease out of the milling throngs with less stress.

Even without the presence of these former Arkansas luminaries, it was a memorable night, made more so by a band that showed they still have what made them the most successful band of the 1970s and ’80s. Guitarist Lindsey Buckingham was easily the star of the show, on both acoustic and electric guitars, hitting many an amazing lick. His band mates were certainly not slouches, with Fleetwood looming large over a massive drum set, clearly loving his job, just from the look in his eyes.

Bassist John McVie was the quiet, steady one, like bassists frequently are, never uttering a word or singing a line, but getting an occasional bass solo to show off his prowess. And then there was Stevie Nicks, swirling around a bit slower than she used to, but still able to belt it out.

This was a mammoth, seemingly flawless production, with no opening act and state-of-the-art lights, huge, towering elevated speakers, visual effects, plus two small screens and a giant one on which were projected views of the band from many angles, plus images and shapes, some of which were as seriously psychedelic as the times in which the band took shape in the 1970s.

The 23-song set began with Fleetwood’s heavy metal drumming introduction to “Second Hand News” at 8:20 p.m. and the show almost hit the 11 p.m. mark with no intermission and a variety of combinations from the full band (augmented by two female singers, a keyboardist and a rhythm guitarist) to Buckingham and Nicks together and Buckingham alone. And no matter what he did, Buckingham wowed the appreciative fans with his finger-picking skill. He even got in a bit of percussion on Fleetwood’s cymbals while also playing his guitar.

Since the tour’s announced intention is to celebrate the 35th anniversary of the band’s album, Rumours, the largest number of songs came from it: the opener, followed by “Chains” and “Dreams” in succession, later scattering throughout the set “Never Going Back Again,” “Gold Dust Woman,” “Go Your Own Way” and the Clinton anthem. Buckingham spoke of the band’s new EP and the group performed “Sad Angel,” from that, quickly moving into one of Nicks’s signature songs, “Rhiannon,” from the band’s self-titled 1975 album (later adding “Landslide,” “I’m So Afraid” and “World Turning” from that release). Another of the new EP songs, “Without You,” came later, along with “Stand Back,” a big Nicks hit from her solo career.

Buckingham told of the band’s refusal to follow industry dictates (“If it works, run it into the ground”) in releasing the odd-for-its-time album, Tusk, just before a mini-set of four songs from that album: “Not That Funny,” the title cut, “Sisters of the Moon” and “Sara.” There were two songs from Mirage: “Gypsy” and “Eyes of the World,” and single songs from The Dance: “Silver Springs” and from Say You Will: “Say Goodbye,” which was the final song of the second encore, when Buckingham and Nicks shared some tender thoughts of their famous troubled times together and apart.

Throughout the show, Buckingham found ways to add new intros or solos to songs that were also far more complex than their chart versions in the days of FM album rock, so fans got more than just a greatest hits show. Instead, thanks to one of the most amazing guitarists in the world of rock ‘n’ roll, they got one of the greatest shows to ever hit Central Arkansas.

The Verizon Center presented the Clintons with a commemorative poster of the show.
Bill and Hillary Clinton were at last nights show in North Little Rock.  They just happened to be in town for the formal dedication of the Little Rock Airport which last year was renamed The Bill and Hillary Clinton National Airport.  And who would pass up Fleetwood Mac? In another photo below they are seen standing in their box seats applauding the band... Mick dedicated 'Don't Stop' to them. 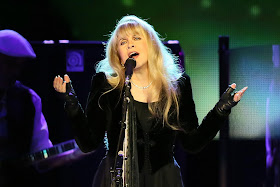 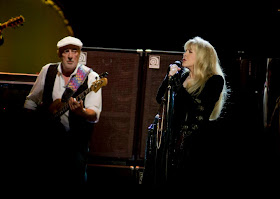 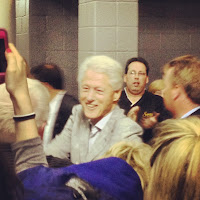 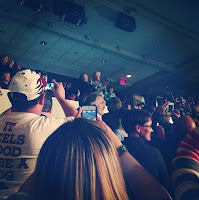 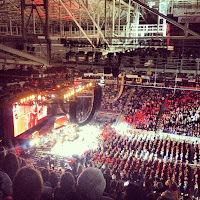 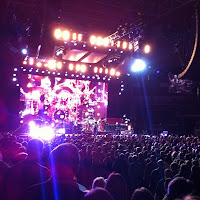 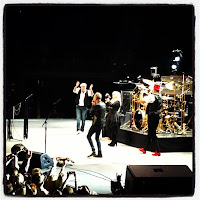 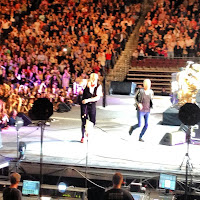 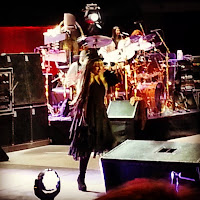 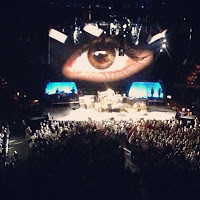 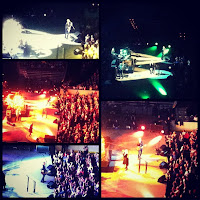 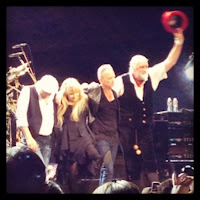 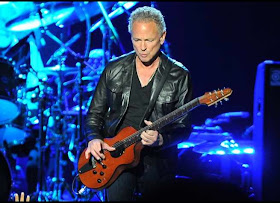