Fleetwood Mac, which had its heyday in the ’70s, drew fans from several generations to the Tacoma Dome Monday in a concert that began as a singalong but ended as a love-a-thon.
By Gene Stout
Seattle Times 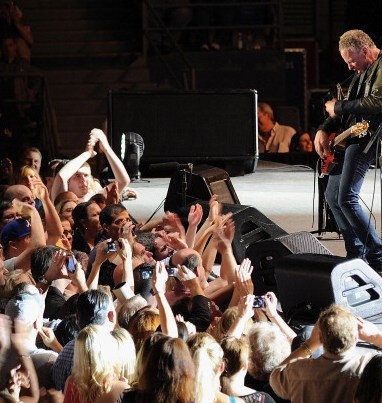 The enduring power of Fleetwood Mac’s musical legacy was clearly evident in a high-energy, 2 ½ -hour concert Monday night at the Tacoma Dome.

A near-capacity crowd spanning several generations grooved on the timeless music of the band’s late-’70s heyday, from “The Chain” to “Gold Dust Woman.” It began as a singalong, but soon became a love-a-thon.

Younger concertgoers who weren’t yet born when the group’s classic, multiplatinum 1977 album “Rumours” was released were among the most enthusiastic. They pushed to the front of the stage for a closer look at singer Stevie Nicks (dressed in her trademark shawls and flowing skirts) and show-stealing guitarist Lindsey Buckingham, who crouched down to let concertgoers touch the strings on his guitar during “Go Your Own Way.”

Opening with “Second Hand News,” the concert quickly gained momentum with such songs as “The Chain,” “Dreams” and “Rhiannon.” The band reserved “Don’t Stop,” “Silver Springs” and “Say Goodbye” for a pair of encores.

The show was mostly a parade of greatest hits, but early on, “Sad Angel,” a song from a new EP, offered a glimpse into the band’s current creative state of mind.

The star power of Nicks and Buckingham, who traded lead vocals and sang duets, enthralled the audience on such songs as “Go Your Own Way,” “World Turning” and “Don’t Stop.” A tender version of “Sara” featured a duet by the two former lovers, who shared tender, sentimental moments throughout the show.

Buckingham introduced “Big Love” as a song whose meaning had shifted over the years, becoming “a meditation on the power and importance of change.” 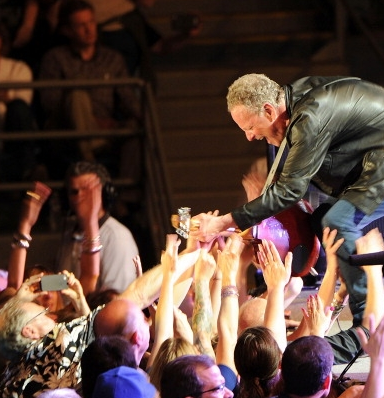 Nicks and Buckingham, whose relationship began decades ago, performed the romantic song “Without You,” which they resurrected on the new four-song, “Extended Play” EP after finding a long-lost version on YouTube.

A giant LED video screen behind the stage displayed eye-popping graphics and dizzying close-ups, especially during the latter half of the show.

Despite the immense popularity of “Rumours,” the band also celebrated its less successful, somewhat experimental follow-up, “Tusk,” by performing the title song as well as “Not That Funny,” “Sara” and “Sisters of the Moon.”

Fleetwood Mac’s core members, now in their 60s, included drummer Mick Fleetwood and bassist John McVie (Christine McVie retired long ago, but is still missed). They were backed by several touring musicians and two female backup singers who hit some of the high notes Nicks could no longer reach.

Drummer Mick Fleetwood and bassist John McVie may be the namesakes and longest tenured members of
Fleetwood Mac. But it was all about the other half of the legendary rock outfit Monday night as it returned to the Tacoma Dome for its first local performance in four years.

That would, of course, be smoky voiced diva, Stevie Nicks, and her former beau, singer-guitarist Lindsey Buckingham, a guy who largely overshadowed his band mates during a hit-filled 2 1/2 hours. The California couple joined Fleetwood Mac’s oft-shuffled lineup in late 1974, propelling the group to a string of multi-million selling albums - “Fleetwood Mac,” “Rumours” and “Tusk” - that provided the bulk of Monday night’s set list.

Not that all was well between the two as Fleetwood Mac staked its claim as the biggest band on the planet. Nicks and Buckingham famously split during the sessions for 1977’s “Rumours,” their rocky relationship providing creative fodder and an underlying tension for “Dreams,” “Go Your Own Way” and other classic cuts about love gone awry. (John and former band mate Christine McVie’s marriage crumbled around the same time, only adding to the backstage soap opera.)

Nicks’ and Buckingham’s ability to co-exist has been somewhat spotty over the years; Buckingham even left the group for a spell after a particularly nasty falling out in 1987. But the former power couple seems to be on cozier terms these days, their rapport breezy as they traded lead vocal duties Monday night, their affection seemingly genuine as they alluded to past romance and the ability to remain friends.

“Without You” is one of four “new” cuts recently released on the band’s new EP, “Extended Play.” Nicks actually wrote it for Buckingham in the early ‘70s, and as she introduced the folky love song she spoke fondly of a time when they were young, starry-eyed and in love. Buckingham later spoke of the healing and perspective that comes with time as he set up the evening’s final number, “Say Good Bye,” a track he wrote for 2003’s “Say You Will” album. “The song remains about faith, resolve for the future and acceptance,” he said, before the duo brought the evening to a fitting close, sans support cast.

The band’s iconic rhythm section often seemed lost in the shuffle as Nicks and Buckingham publicly worked things out. If not for their Dickensian getups - Fleetwood’s cap and cropped pants came straight from the cover of “Rumours” - they might have melted entirely into the four-piece backing band.

McVie drew applause, though, as he delivered the iconic bass breakdown to “The Chain,” the night’s second selection. And Fleetwood was occasionally the center of attention, his rumbling intros galvanizing cuts like “Tusk,” his howling drum solo pumping the crowd up during encore opener “World Turning.”

Nicks may not have the vocal range she used to. But she certainly hit her stride with a dreamy, sing-along delivery of “Landslide,” a song she dedicated to members of her family in the audience; and, clad in her usual array of shawls and, at one point, a top hat, she also captivated with “Rhiannon,” “Gypsy” and “Gold Dust Woman,” among other cuts she sang lead on.

But she often served as wispy foil to Buckingham’s unbridled gusto and dazzling guitar heroics. Clad in skinny jeans and black leather jacket, the 63-year-old rocker delivered with the intensity of a man half his age. His enthusiasm palpable as he stomped and “yeehawed” his way through “Tusk,” his voice still pliable and effecting as she went from papery whisper to a life-affirming howl during mid-set high point “Never Going Back Again.”

His furious finger picking erupted in a percussive, fretboard slapping finale during “I’m So Afraid,” the epic number that preceded the encore. Officially, it was a Fleetwood Mac concert, but occasionally it felt more like the Lindsey Buckingham show.