Fleetwood Mac will perform Friday, June 7, at the Tampa Bay Times Forum in Tampa, which sounds like a terrific reason for a road trip. 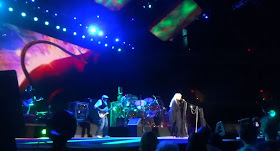 The band's 2009 show at the old Amway Arena was an exercise in highly elevated nostalgia. Although that tour was called "Unleashed," the band didn't offer too many wild embellishments on its substantial list of classic songs: "The Chain," "Dreams" "Gypsy," "Rhiannon," "Second Hand News," "Say You Love Me," "Go Your Own Way."

The most spontaneous moments came courtesy of band member Lindsey Buckingham, who segued from intricate finger-picking to fiery guitar-god excesses. His performance foreshadowed a transcendent 2012 solo concert at Plaza Live.

Buckingham alone would be worth a road trip.