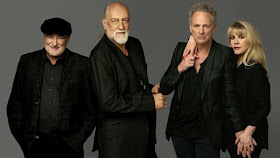 A press release issued today said demand for pre-sale tickets to the first show was so high, a second show had been added to their tour.

Fleetwood Mac will now perform at Vector Arena on December 6 and 7.

"We are thrilled to return to New Zealand where we've always loved performing. Our fans there are phenomenal," said the band in a statement.

Tickets for both shows go on general release at 9am, June 13.  Live Nation pre-sale tickets are on sale now