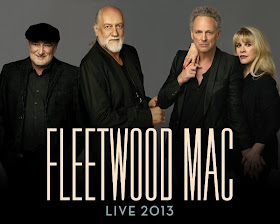 Fleetwood Mac is winding down its massive North American tour before taking a well deserved couple of months off until its 30-date European and Australian leg. The band's recent setlists have been chock-full of the band's greatest hits from the '70s and '80's, but with absence of Christine McVie -- and most of her songs -- the band's setlist has been able to shine a light on some deep album cuts and personal favorites.

Lindsey Buckingham told us that a Fleetwood Mac show is pretty much pre-designed due to the band's hits -- but that filling in the gaps between the blockbusters takes real passion and artistry: "There was a kind of an openness to let people try what they want to try, so there's a few other songs that are a little bit more off to the left in the set this time, too, aside from new stuff. So, y'know, if you sort of come to the conclusion that maybe 75 percent of what you're going to do every time is, y'know, those things you can't get away without doing -- for lack of a better term -- it's really what you do around the edges. And I think we really found some interesting edges between some more obscure stuff and some of the newer stuff."