Nicks is the hippie earth mother cloaked in shawls and mystery 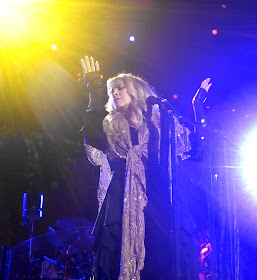 MANSFIELD - Fleetwood Mac will not be going gently into that good night.

If Friday night's show at the Comcast Center was any indication, the legendary band will be staging spirited live performances well into their golden years.

The foursome - John McVie, Mick Fleetwood, Buckingham and Stevie Nicks - have survived breakups, breakdowns, drug addictions, a fickle music climate and the loss of singer-songwriter and pianist Christine McVie, and what remains is a band that's clear-eyed and clearly in love with what they do, full of youthful energy despite the fact that they're technically senior citizens.

With no opening act and two encores, Friday's set was a 2 1/2-hour marathon of Mac classics that spanned from their self-titled 1975 album - when the addition of Stevie Nicks and Lindsey Buckingham transformed them from a British blues band to an international rock sensation - to 2003's "Say You Will" and a pair of tracks off their new four-song EP.

There was time for mega-hits such as "Go Your Own Way," "Don't Stop," "The Chain" and the hypnotic "Dreams" as well as lesser-known tracks like a slowed-down "Never Going Back Again" and a punchy "Eyes of the World." A segment from "Tusk" - the album that represented the band's collective subversion of industry formula - included "Not That Funny," "Sara" and "Sisters of the Moon," which, before this tour, hadn't been performed onstage since 1981.

Buckingham continues to play the tortured guitar god, delivering masterful work on songs such as "So Afraid" and the acoustic "Big Love" and standing on the stage in triumph after solos as if he'd just slayed a personal demon.

Nicks is the hippie earth mother cloaked in shawls and mystery, twirling and dancing and conjuring up characters on songs like "Rhiannon" and "Gold Dust Woman." If Buckingham is the group's power source, Nicks is its emotional center, and nowhere was that more evident than on the venue singalong that was "Landslide." Even her rambling intro to new song "Without You" - originally recorded as a demo in 1974 and lost for many years until it surfaced on YouTube - was charming.


With Christine McVie absent, the former Nicks-Buckingham love affair is now the axis around which Fleetwood Mac revolves. They take the stage together, they sing to each other and about each other, and a mere look in each other's direction or a slight embrace elicits howls from the crowd. During the second encore, Nicks aimed a spiteful "Silver Springs" at Buckingham, and then the pair remained alone onstage for an acoustic "Say Goodbye," a beautiful and bittersweet song about acceptance and closure.

Thirty-eight years later, some things have changed. Nicks no longer has the range she once did. Band members have visibly aged. But the band's giddy energy and their lightning-in-a-bottle chemistry remains intact.

It seems the pitfalls and excesses of fame have fallen away, and what's left is a foursome whose stardom has been tempered by wisdom and gratitude.

Buckingham said there are several chapters left in the book of Fleetwood Mac, and indeed the band's love affair with music - and their fans' love affair with the band -doesn't appear to ending anytime soon.

EYES OF THE WORLD
GYPSY