Fleetwood Mac delivers a marathon concert at The Q
By Chuck Yarborough, The Plain Dealer


Fleetwood Mac gave a concert Saturday night at The Q with Mick Fleetwood on drums, Lindsey Buckingham on guitar and vocals, John McVie on bass and Stevie Nicks on vocals, and they were aided by a backing band that provided an extra guitar and keyboards as well as a couple of harmony singers who sang on a lot of the 23 songs the Rock and Roll Hall of Famers did in a two-hours and 40 minute set that included hits from the beginning to the current days of a career that, at least with Buckingham and Nicks in the fold, back in the early 1970s, but really couldn’t quite recapture the magic of those days, despite some really impressive guitar work and a stellar drum solo by Fleetwood, mainly because Nicks has lost a little of the somewhat limited range she had to begin with.

My computer tells me that paragraph has 145 words, and my instincts tell me you probably quit reading about 30 words into it. Which goes to prove the point that there’s a lot to be said for editing.


The Rock and Roll Hall of Fame has scores of inductees, and few are more worthy of the honor than Fleetwood Mac. The band’s catalog – from “Rumors’’ to the newest release, a four-song EP called, fittingly, “Extended Play’’ – is a testament to the talents of Fleetwood, McVie (both John and his ex-wife and former bandmate, Christine), Buckingham and Nicks.

“Second Hand News,’’ “Rhiannon,’’ “Tusk,’’ “Never Going Back Again,’’ “Go Your Own Way,’’ “Don’t Stop’’ and the rest were, for a lot of us, the first “grown-up’’ songs we fell in love with. They were and are the tunes you can hear over and over listen to and find new meaning and nuances in each listen.

One reason for that was obviously Saturday night: Fleetwood, McVie and Buckingham are hugely gifted artists. McVie lays a solid foundation, but he’s also capable of turning his bass into a lead instrument. The always animated Fleetwood – the inspiration for the Muppets’ drummer Animal, by the way – is that rare drummer who uses his fills to complement his jungle-beat grooves, especially on tunes like “Tusk.’’

And then there’s Buckingham’s guitar. In a word, WOW. His fingerpicking style on his beloved Turner Model One guitar really is the stuff of legends. Multiple big-screen close-ups showed that he was able to bend strings from here to Toledo and pull sounds out of a guitar that most people wouldn’t think possible, especially on “I’m So Afraid’’ and “The Chain.’’

But Fleetwood Mac has always been about the vocals, and as the saying goes, therein lies the rub. Nicks still LOOKS 25, but she’s 65 now, and her already limited range is even more limited. Not that much, you understand, but enough to make a difference. To use a sports analogy, it’s like a home run hitter who’s lost a few mph off his swing; balls that used to reach the bleachers are now warning-track outs.

That being said, she’s still capable of jacking one every now and then. “Landslide,’’ covered by the Dixie Chicks and so many others, will forever be a Stevie song, and she still does it better than anyone. Likewise with “Sisters of the Moon’’ and “Gold Dust Woman.’’

The most curious part of the show may have been the second of two two-song encores. Who would choose to end a Fleetwood Mac show with Fleetwood and McVie offstage, leaving Buckingham and Nicks alone to do “Silver Springs’’ and “Say Goodbye?’’ 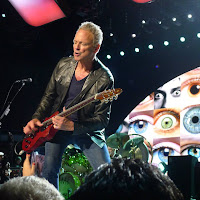 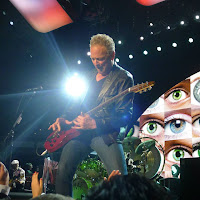