ALBANY – It’s been a long time since we’ve seen Fleetwood Mac. They canceled their 2009 Albany show due to poor ticket sales, and the last time that the band rolled into town was a decade ago, when Albany’s big downtown concert venue was still named the Pepsi Arena. Now it’s the Times Union Center, and on Wednesday night they filled it with more than two and a half hours worth of pretty much non-stop hits. Or at least instantly recognizable songs. Yes, the big Mac attack was back, and from Mick Fleetwood’s galloping drum intro to the opening “Second Hand News” straight through to their fourth and final encore of “Say Goodbye,” they managed to come pretty darned close to re-capturing their “Rumours”-era glory days.

Fleetwood and bassist John McVie have always been the band’s muscle, but the focus these days is clearly on vocalist Stevie Nicks and vocalist-guitarist Lindsey Buckingham, who respectively provide the mystic heart and the brains of the band.

In 2011 when Buckingham dished out a brilliant concert at The Egg, he explained his approach to his musical career in Hollywood terms, saying that sometimes he’s in a box-office blockbuster movie (Fleetwood Mac, or as he says, “the Big Machine”) and sometimes he’s in a gritty, indie art-house film (his solo work). And like, say, Johnny Depp, Buckingham brings plenty of indie quirk to the table even when he’s playing with the Big Machine. Take for example, the string-strangling, big guitar freak-out that he injected into “I’m So Afraid,” the willfully eccentric “Tusk” and his dark but furiously scintillating solo rendition of “Big Love.”

Nicks, of course, has had the bigger solo career, and her twirling rendition of “Stand Back” was the lone song of the night that wasn’t culled from the Fleetwood Mac catalog. She shined brightest in the sparser musical setting of the sublime “Silver Springs” and “Landslide” (stripped to a simple duet with Buckingham).

Nicks’ witchy woman psychedelic swirl of “Gold Dust Woman” was unfortunately marred by an aimless, meandering jam, and likewise, “World Turning,” the only song of the night that hinted at Fleetwood Mac’s pre-platinum pop success as a blues band, was burdened with Fleetwood’s drum solo, which was more entertaining than musical.

Bolstered throughout the night by at least five backing musicians, the band did offer a couple of new songs from their “Extended Play” EP, although the best of them was the charming “Without You,” a previously lost Buckingham Nicks song from their pre-Mac days. But after a night of what was predominantly ’80s nostalgia, it seemed somewhat ironic that they would wrap up their first set of encores with “Don’t Stop” – penned by departed member Christine McVie – singing, “Don’t you look back…” 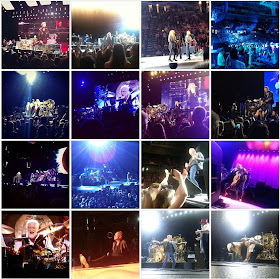 Wow... Albany is quick with the videos!

GOLD DUST WOMAN.. Probably the only real fluid song of the night, this and Mick's drum solo, where you really don't know what your going to get... Another great performance!  She seems to be projecting a rather fragile vocal here tonight.  And the yellow light stuck around for the ending of the tune when she holds up her shawl... in the last few performances it seemed like the light was fading too fast before her dramatic finished.

NEVER GOING BACK AGAIN
LANDSLIDE
GO YOUR OWN WAY