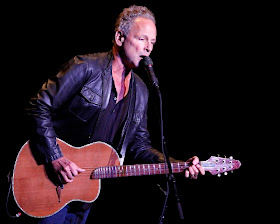 
Lindsey Buckingham is not a big fan of looking back or investigating the various versions of his songs.

The Fleetwood Mac guitarist has not seen “Sound City,” the recently released Dave Grohl documentary about the LA recording studio that played a pivotal role in the formation of the Buckingham-Nicks incarnation of the band. The episode of “Glee” devoted to the classic Mac album “Rumours” also escaped him. He has not heard the various tribute albums dedicated to the group. He didn’t catch Little Big Town and Keith Urban performing “The Chain” on the recent CMT awards. He does not have a favorite cover. “I’m not well enough informed,” he says with a laugh on the phone from a Chicago tour stop.

When it’s suggested he gather all these various items together and spend a day immersed in them, he jokes, “Yeah, I’ll spend a whole day and drop a tab of acid and watch all this stuff. Hopefully, I’ll have a good trip.”

We chatted with Buckingham, who plays with Fleetwood Mac at the Comcast Center on Friday, about the trip so far.

Q. Recently Fleetwood Mac released a four-song EP. After the various reissues, does it feel good to put out new music?

A. Last year we contemplated things we could do that would set this tour apart and might sow some seeds for down the line. So John and Mick came over from Hawaii and we got in the studio and cut a bunch of stuff without knowing exactly where it was going. I won’t say it was a surprise, but I will say it was a pleasant outcome and we were all very excited about it.

Q. So these four songs could be a launching pad?

A. That would be on our wish list. Fleetwood Mac’s politics are sort of like walking through a minefield. (Laughs.) I guess a lot of bands are really. So we’ll see how it goes.

Q. Two of the four tunes really struck me. One is your ballad “It Takes Time,” which feels like a very honest look back at the band and your relationship with Stevie.

A. It is. It’s probably fair to say a lot of what she’s done on her own and a lot of what I’ve done on my own and to some degree what we’ve done within the context of the band has been — at a distance — to prove something to each other, even though we haven’t been together for years and years.

Q. And her song “Without You,” was actually written back when you were together and sounds of a piece with your early work with the group. The two songs feel like bookends of a kind.

A. Well yes, because [hers] is, on a subject matter level and even on a stylistic level, very innocent and naïve in a way, and maybe not even fully formed in terms of the place we got to. But more importantly, it’s very idealistic and full of illusion, and we need our illusions. But later on you have to grow and come to grips. Mine was written at a time where instead of all this being before us, it’s more or less behind us and in a very appropriate way all of those illusions have been cast aside.

Q. What does your wife think about the fact that you’re still writing songs about Stevie Nicks?

A. That’s a good question. She’s secure enough, and knows who she is and knows who we are enough, to be philosophical about it and to be able to separate the professional side of my life, and the role that I might be playing at this point, from the reality.