The front lady of Fleetwood Mac comes alive yet again with her "Stevie Nicks: In Your Dreams" 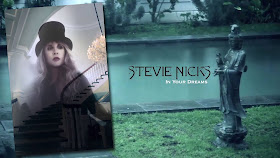 There isn’t anyone on the planet that hasn’t heard a Fleetwood Mac song, right? Dreams? Rumours? Yes? Well the front lady of one of the greatest bands of the last century comes alive yet again with her " Stevie Nicks: In Your Dreams " let’s call it ’reality’ movie. In the vein of showing the behind-the-scenes, everything including guts and gore, the fans of aging rock stars want to either read their grotesque memoirs or see a rockumentary where their heroes reveal everything about their creative process.... and some more.

And the latest Stevie Nicks album, on which this film is based, with hits like "Secret Love" with its soft groans and "Moonlight (A Vampire’s Dream)" acting as a the zeitgeist’s trance and a hopeful "You May Be The One" feels just right for this older, stronger so-called white-winged dove.

As the cameras follow the gypsy-like singer around her home with documentarian Dave Stewart (from Eurythmics fame) and crew, you realize just how talented and beautiful this Phoenix-born singer truly is. Forget the awards especially the eight Grammy nominations (holding the record for most nominations for Best Female Rock Vocal without a win), the various hit singles, the fact that she slept with practically the whole band, the hysterical witchcraft allegations, the signature shawls and capes - the genius comes in the quieter moments where she wants to get her artistry just right. And she does that like a tight ropewalker above the clouds.

Purchase, then download or stream: "Stevie Nicks: In Your Dreams" $9.99
http://inyourdreamsmovie.com/