Nothing out of the ordinary happened tonight when comparing the show to most of the North American dates. The band was clearly happy to be back playing London.

Stevie made note that there are two places she deems really important places to play, one of them being MSG in NYC and the other being London.  With that, they got the party started!

It looked like there were a couple of technical issues causing a couple of extended delays between a couple of songs... Nothing too noticeable, but still noticeable. Lindsey's guitar tech jumped up on stage at one point and ran over to him... Don't know what that was about. One noticeable design change on stage. During Landslide and Big Love they got rid of that drop down drape and now their images are projected on the big screen behind them which I think is a lot better and utilizes that screen to show the band members larger than life a lot earlier then waiting for practically the end of the show.

Stevie whipped out the new boots she's been sporting on this leg during Stand Back, and they were on until the end of the show... She was her usual hilarious self during the "Without You" intro.  It was still long, but she didn't go into the part where she thanks Mick, John and Lindsey for taking her along. It'll be interesting on the nights Christine is there to see what she says.  And speaking of Christine... You all know by now she wasn't there tonight, but what would be even more perfect (see that) then having Christine there for just "Don't Stop", wouldn't it be cool if she partook in "World Turning" and also did the keys on "Silvery Springs".  All the songs are in a row in the overall set - with the intros mixed in there as well... I think that would be a cool segment of the show.... Looking forward to see if they really play this up and how they treat her re-appearing with the band. 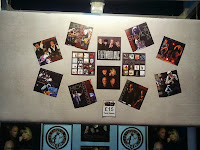 TOUR BOOKS
FINALLY they have a tour book!  And it looks great!  ! (15 pounds) Neal Preston did all the photography.  The book is all photos, with the only writing being the tour credits at the end.  Its basically the size of a calendar, big and square.


Fleetwood Mac The O2 Arena, London
By Will Hodgkinson
The Times


Thirty-six years after Rumours became the soundtrack to the age of divorce, four of the five people that made it are reliving their personal dramas once more. With their soft rock masterpiece from 1977, Fleetwood Mac articulated the new rules of relationships, capturing the reality of affairs, tensions, betrayals and break-ups and selling over 40 million
copies in the process.

They also documented their own reality. Singer Stevie Nicks was splitting up from guitarist Lindsay Buckingham, songwriter Christine and bassist John McVie were getting divorced, drummer Mick Fleetwood was stuck in the middle, and they dealt with it all in the best way Seventies rock stars in Los Angeles could: by taking huge amounts of cocaine. Now all but Christine McVie have come back for more. Without the cocaine.

Buckingham said that Rumours “brought out the voyeur in everyone”. It also spoke to millions: the emotional truth of the music jumped out of the grooves. Judging by the hordes filling a packed O2 arena, it still does. Floaty scarves hung from Nicks’ microphone, but beyond that the stage was bare: fitting for a concert dedicated to an album defined by its simplicity.

Nicks channelled her inner hippy witch in a black sequinned ensemble, emerging from the shadows to launch into Second Hand News, one of the many songs on Rumours expressing the bitterness of being a cast-off lover. Then it was time for The Chain, the most starkly autobiographical song about the love tangle, its irresistibly simple beat sounding as fresh as ever.

After all these years, it was strange to watch Nicks singing Dreams as Buckingham, Fleetwood Mac’s resident tortured artist and the subject of the song’s words, played guitar next to her. Fleetwood, cocooned behind an enormous drum kit, looked, with his flat cap, black tights and lolling tongue, like a cockney jester on day release.

“Every time we come back together it’s different . . . it appears there are still a few chapters left in the story of Fleetwood Mac,” said Buckingham, before giving the audience their cue to rush to the bar: a new number. In the event, Sad Angel was a pretty decent slice of California rock, and Nicks followed it up with Rhiannon, her song about a Welsh witch that put her on the map. Her throaty delivery was perfect for the song’s combination of spooky mystery and Top 40 appeal.

Buckingham gave himself a metaphorical pat on the back when he introduced a few songs from Tusk, the non-commercial follow-up toRumours and very much his album.

“I’d like to have been a fly on the wall when Warner Brothers first heard Tusk,” he chuckled, before celebrating his uncompromising genius by singing It’s Not That Funny.

“That electric crazy attraction between Lindsay Buckingham and Stevie Nicks never dies,” Nicks said recently. Whether Buckingham, married with kids, would agree with her is debatable, but the pair did play a touching, tender version of Landslide together. Buckingham managed to silence the arena with a solo acoustic rendition of Never Going Back Again.

As a testament to the power of mainstream rock, it was hard to beat. And after Fleetwood played a drum solo while muttering something unintelligible, the band launched into Don’t Stop, proving there is nothing more powerful than a perfect song.