Stevie Nicks praises Miley Cyrus: 'She has the ability to be great' Read more:

Stevie Nicks has praised Miley Cyrus, predicting that she will have a long and successful career. 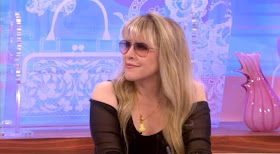 The Fleetwood Mac star told the Loose Women panel that the 'Wrecking Ball' singer has the ability to become a "great songwriter".

Asked what advice she would give to young talent going off the rails, Nicks said: "I think that people will be sorry. I am going to use Miley Cyrus as an example as I happen to really like her.

"I happen to think that she - unlike some of the other rock and roll 'slash' actresses that we are really worried about - has the possibility and the ability to be a great actress, a great singer and probably a great songwriter and go on until she's my age.

"I think that she will not be very happy with what just went down two weeks ago. When you're really young, you don't think about even ten years from now or five years.

Cyrus has caused controversy in recent weeks with a provocative performance at the MTV VMAs and by going naked in her new music video.