UK REVIEW: Stevie Nicks: In Your Dreams "The film is enchanting but at the same time is entirely real"

"For fans of Fleetwood Mac and Stevie Nicks, this film is an enjoyable voyage through a life that is usually kept quite guarded outside of the lyrics of her songs." 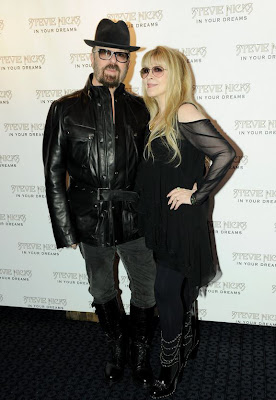 Last night I sat in a room with Stevie Nicks, Mick Fleetwood and Dave Stewart. I had to pinch myself several times because if you had told me 18 months ago when I was sat playing Fleetwood Mac and Eurythmics songs on student radio that I would be sitting less than 3 metres from some of my musical heroes, I would have probably thought you were on crack.

Being my first experience of a premiere you can well imagine my excitement at finally being one of the people walking up the red carpet, not just one of the mere mortals standing on the wrong side of a metal barrier clamouring for the chance to meet their idols. Once inside and safely installed in my front row seat, I cracked open the goodie bag which included a much appreciated cocktail and bag of popcorn and awaited the start of proceedings. When Stevie, Dave and Mick entered the room the audience went wild, demonstrating that this was not an ordinary premiere full of slightly indifferent industry moguls just there for the free night out, this was a room full of fans much like little old me who just lucked into the chance to spend the evening with Stevie and Dave.

Once Stevie and co had taken their seats, the film, Stevie Nicks: In Your Dreams, began. This film tells the story of how Stevie and Dave made her 2011 solo album In Your Dreams, which was Stevie’s first solo recording in over a decade and arguably the best collection of songs she has released since the early 80s. Dave Stewart filmed the entire 9 month process, which largely took place in Stevie’s Southern California home. Stewart begins the film by informing the audience that he compulsively films everything that happens in his life, on any cameras that he can get his hands on. This film was largely filmed on ‘flip-cameras’, often just mounted around the living room and staircase in Stevie’s house where most of the writing and recording took place. The effect of using these everyday cameras is that the film has a charming home-movie quality that only furthers the privileged feeling to be gaining an insight into Stevie’s psyche.

The film is enchanting but at the same time is entirely real. It is at times heart aching, at others funny, but always charming. This is the real Stevie Nicks, without the tambourine and flowing scarves otherworldly stage persona. This film is a portrait of an incredibly strong and talented woman, a warm insight into how she creates and crafts every song around a certain event or feeling. It’s no secret that Stevie Nicks is one of the most accomplished and moving song writers of her generation, and this film perfectly charts the history and situations that allow her to write some of the most inspiring lyrics in music history.

Stevie Nick’s has an unparalleled ability to reach out to her fans, something that not only came through in segments of the film where fans were interviewed about their responses to certain songs, but in the room as a whole. Anyone who has ever sat and really listened to the lyrics of songs like ‘Landslide’ or ‘Edge of Seventeen’ can attest to feeling like Stevie Nicks is speaking entirely from the soul, trying to vocalise feelings that most people have felt at some point in their lives. It is this quality that makes her music so universal and gives it the ability to still inspire new generations of music fans.

The film goes through each of the album’s 14 songs and outlines how they were conceived, recorded and how they fit into the album’s fabric as a whole. A number of musical collaborators appear throughout the film, but Stevie and Dave remain a constant, symbolising their strong and unyielding friendship. Among those who helped the pair complete their journey are Fleetwood Mac band-mates Mick Fleetwood and Lindsey Buckingham, Mike Campbell of Tom Petty and The Heartbreakers and, somewhat randomly, Reese Witherspoon.

The film highlights centre around the tracks ‘You May Be The One’, ‘Soldier’s Angel’ and ‘New Orleans’. In particular the story around ‘Soldier’s Angel’ and how asking Lindsey Buckingham to play guitar on the song ended their 20 year war is particularly poignant. With Fleetwood Mac performing again on tour next week in the U.K, the ceasefire is a welcome sight and sound. The chemistry between the two is still undeniable, but Stevie is still very much wearing the trousers! The ‘New Orleans’ segment which focuses on how the Hurricane Katrina disaster inspired the song is also incredibly moving, with the song serving as a tribute to the city’s everlasting connection to music and its ability to bounce back from even the toughest of times.

The film is well edited considering that there was nearly a year’s worth of footage to cut down to a running length of just over 90 minutes. The Dave Stewart recorded footage, coupled with talking-heads style interviews, snippets from music videos and archival footage all comes together perfectly to construct a picture of Stevie Nicks as she is today. Stevie is the original creator of girl power. Wearing her signature platform boots, she commanded the stage during the Q&A, really demonstrating her creative intellect when it comes to music and the industry as it is today. Poor Dave Stewart could barely get a word in, but I suspect that is something Dave has come to accept from life with Stevie Nicks.

The film itself stands up with the best music documentaries out there. It is more than a vanity project aimed at bringing in mountains of cash like recent blockbuster music documentaries (I’m looking at you One Direction). For fans of Fleetwood Mac and Stevie Nicks, this film is an enjoyable voyage through a life that is usually kept quite guarded outside of the lyrics of her songs. For those who aren’t well acquainted with Fleetwood Mac, this film is still relevant. Anyone who appreciates a good story and great music will be entertained here. Moreover it might just inspire you to order yourself a copy of In Your Dreams or Fleetwood’s Rumours and let your musical education begin…

Review via The Reel Thing

The Documentary "In Your Dreams" is available now in the U.S. and Canada to download at inyourdreamsmovie.com.  The film will be available on DVD and VOD in the UK in November.
Nickslive at Tuesday, September 17, 2013
Share