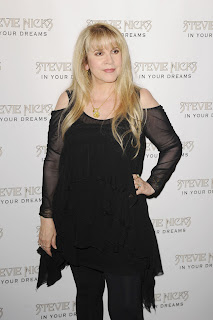 Stevie Nicks — maybe the only woman who can make Beyoncé seem ordinary — has finally openly doled out praise for the singer in an interview. Queen B might as well hang up her sparkly stage costume and retire now, because there is no higher career summit to which she can ascend. In a recent interview with the Telegraph, Nicks raved about Beyoncé's levelheadedness and general awesomeness: "Beyoncé's great. She's got her alter ego [Sasha Fierce], but Beyoncé the girl, the woman, is very sweet and nice and polite. She's a good role model. She's not skanky. I'm glad we have her," she said. How lucky, because we know what happens when Stevie is not glad to have you. We're looking at you, Nicki Minaj.