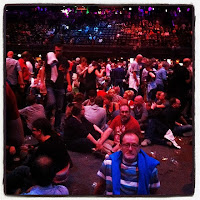 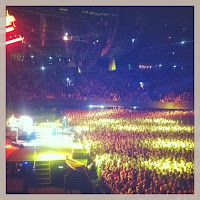 The Fleetwood Mac concert tonight at the Ziggo Dome in Amsterdam was to begin at 20.00 (8:00pm) but was postponed due to technical problems with the mixing console. Fans sat and waited for the concert to begin and were told that technicians would have to come fix the mixing console which apparently had issues. Parts were to come from Utrecht, about 40kms away. Fans having to sit and wait for an extra hour probably isn't so bad if you have a seat, but this is a huge venue with the full floor being all general admission so fans had to stand and make due... Some hit the floor. This is Fleetwood Mac's last European show and its completely sold out so luckily this could be fixed and Fleetwood Mac won't have to end their European tour on a quiet note.

The show finally got underway approximately an hour and a half later than expected.  Stevie appeared on stage thanking their fans for their patience. No telling on whether the set will be abbreviate because of venue curfews or if they will be granted concessions because of the unfortunate situation. The Ziggo Dome posted on their Facebook page that the show will end at Midnight so it appears they will play the full set... We'll just have to wait and see.  They're on stage now.

Photos by meganlouiseruss and Joost