TONIGHT: Fleetwood Mac Live in Amsterdam @ZiggoDome. LAST SHOW Europe! Give Them a GREAT Send Off!

One more European show to go this Saturday night in Amsterdam at the Ziggo Dome and that's it for the European leg of the tour. Fleetwood Mac then take a short, but I'm sure a much needed, two week break before regrouping in Sydney, Australia for a string of dates through the country beginning November 10th. The Australian / New Zealand leg of the tour concludes in Auckland, New Zealand on December 7th. Fleetwood Mac are scheduled to play in Sydney (2 shows), Brisbane (2 shows), Melbourne (2 shows), Perth (2 shows), Adelaide, Geelong, Hunter Valley and Auckland (3 shows) before heading back to the US for their final public show this year December 30th in Las Vegas at the MGM Grand.


If you are one of the privileged ones that will be seeing the band in Amsterdam on Saturday, their last Euro show... Give them a great send off and have a blast at the show!! 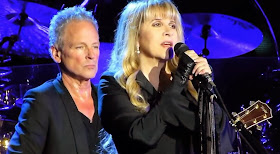 "Without You" intro Stuttgart, Germany Oct 14 2013
These intros are long... but who cares, I think they're entertaining - especially this one... You never know what your going to get like in Stuttgard, Germany... This intro is way out of the ordinary from all the other intros...

Stevie says after Lindsey's part of the intro (a little testily), "Can I just add... in Stuttgart, to that little story since you do like to throw that in... that for 5 years previous to that, I washed your jeans...sewed moons and stars on them... fringed them... Ironed your t-shirts... Made your house beautiful, cooked dinner, cleaned the house, was a waitress and a cleaning lady... and ALSO loved you."  Lindsey's response to this is just as funny... but it all ends sweetly.