THE singer's legendary band enjoy a memorable gig with a thrilling set in-front of 13,000 fans at the newly-opened Hydro.
By Dailyrecord.co.uk


FLEETWOOD Mac main man Lindsey Buckingham had a birthday party to remember last night in front of 13,000 fans at a sold-out Hydro. 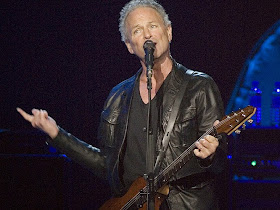 The legendary band produced a thrilling set that covered their entire 46-year career. And they were sensational from start to finish.

The heavy desert rock of The Chain, with perfect harmonies and Lindsey’s six-string fireworks, was an early highlight.

He was the star of the show, with his presence and outrageous guitar skills.

But Stevie Nicks was a joy to watch, and listen to, throughout. Whether on fragile ballads (Without You) or full-on rockers (Gold Dust Woman) she still has one of the finest voices in music.

Anthems like Go Your Own Way and Rhiannon went down a storm, but Lindsay’s solo acoustic version of Big Love really stood out too. Even now, when Fleetwood Mac are on form like this, no one can touch them.
Nickslive at Friday, October 04, 2013
Share