Review: Fleetwood Mac Live in Glasgow "Nicks is indeed a songwriter of rare distinction; she was always so much more than just the pretty girl with the nice voice"


That the story of Fleetwood Mac is a movie begging to be made is not in question. Absconding guitar players, cocaine addictions, mental breakdowns, obsessive creative geniuses, intraband/extra-marital affairs, violence, excess, recrimination, huge success and massive hanging clacker balls seem to be elements that perfectly fit the silver screen. And what’s more, that’s only some of the tale. It really has been a unique, astonishing journey. But while the legend has played a part in tempting 12,000 people to Glasgow’s newest venue, it’s what we’re actually here to witness that’s really important. Are Fleetwood Mac purely about the past or do they have anything to offer in the present? 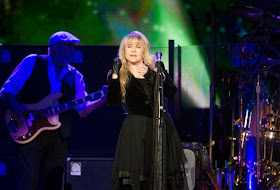 Those au fait with the Glasgow music scene will be aware of The Hydro’s unloved and much-maligned older brother, the SECC. It appears that the new venue was designed as a sort of antidote, with the starting place being a list of the many faults of the original and the simple premise of ‘fix this’. To be fair, the new building is attractive, if a tad garishly lit in the colours of the electricity supplier who sponsor it. Facilities are excellent, with plenty of bars, toilets and food outlets – who even seem to serve edible food. The seats are comfortable and roomy. It’s almost revolutionary.

The new surroundings seem to have amplified the big-match feel that a superstar band brings to any city. And Fleetwood Mac are certainly that, one of the 70s and 80s rock Royal Family who can genuinely claim to be better known than many Prime Ministers. When they emerge to blast into the perfect pop of ‘Second Hand News’, the place goes slightly mental. That qualifier is removed when the snaking opening guitar lines of ‘The Chain’ begins to wind out, and by the chorus the crowd are in danger of losing their shit. By the bass breakdown, they have. The sound is pristine and the venue seems to have been built with acoustics as well as aesthetics in mind.

Stevie Nicks takes over for ‘Dreams’, and it occurs that her role as an icon in modern music is criminally underplayed. The amount of women in the audience –  of all ages – bedecked in lacy shawls or trademark hats is a visual clue, but then there’s the reverence with which the song is received. It’s like a rock version of ‘I Will Survive’ to Glasgow’s female populace.  And, as the various songs she’s written through the years appear, you’re reminded that Nicks is indeed a songwriter of rare distinction; she was always so much more than just the pretty girl with the nice voice.