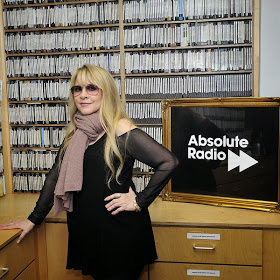 Dave Stewart was also an Absolute Radio Icon a few days following Stevie.  He played a selection of Eurythmics tracks, his new single Every Single Night plus at about the 33:00 minute mark "Sara" from Fleetwood Mac is played and Dave talks about meeting up with Stevie in London along with Mick Fleetwood and Christine Mcvie during the Premiere of In Your Dreams and talks about the film.  Also talks about first meeting Stevie about 30 years ago around the time Tom Petty's Don't Come Around Here was being recorded.