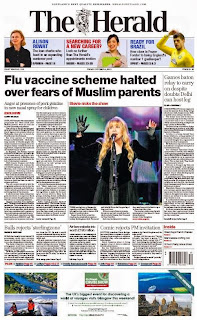 THERE was big love in Glasgow for legendary rock band Fleetwood Mac last night as they took to the new SSE Hydro for a sell-out show.

Singer Stevie Nicks wowed the crowd as she joined fellow members Lindsey Buckingham, Mick Fleetwood and John McVie in the Glasgow leg of their world tour.

Without a new album to promote, the set-list was built around their hits which include Dreams, Don’t Stop and Go Your Own Way.

Such was the demand for tickets, they were being sold online for up to 10 times their face value.

The band are celebrating the 36th anniversary of the release of classic album Rumours.

MICK Fleetwood starts it off. Looking for all the world like a gnomish 1920s saloon barman, mouth working wildly in surprise or delight or both, there it is: a crash, a thud and Second Hand News. Opening the two-and-a-half hour set comes the whirlwind trio of Second Hand News, The Chain - John McVie delighting on the bass - and Dreams. 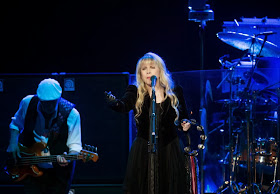 The whirlwind continues for the next hour, Rumours classics followed by a dabble around Tusk and Sisters of the Moon, performed for the first time in 33 years. Slipped in, almost so as you wouldn't notice, is new song Sad Angel.

Stevie Nicks and Lindsey Buckingham rotate round and out like cuckoos from the eponymous clocks, singing Landslide, a poingancy added by the truth of the line "I'm getting older", and Big Love before a neat and delicate Never Going Back Again.

The rotating is interspersed by an intimate bonhomie between the two who hold hands, hug and share coy little glances. She tells a lengthy tale of the band forming that culminates in the double entendre (from Buckingham to Fleetwood): "If you take me, you gotta take my girlfriend too."

Buckingham is slick in leather jacket and jeans; Nicks rambles charmingly before songs, claiming she has a glut of anecdotes to excise before travelling to Continental Europe where her tales of times gone by will be not understood.

Every track is a reminder of just how lithe and skillful Buckingham is on the guitar; Nicks's voice still powerful, although some of the top notes elude her; McVie and Fleetwood - dressed identically, bar Fleetwood's scarlet shoes - own their respective parts. The four come together most powerfully on Gold Dust Woman.

Occasionally the songs, and not only Nicks, ramble. There is a little midway slump, a little self-indulgence. But the whole excels in a way that only such a band with such a backstory can.
Nickslive at Thursday, October 03, 2013
Share