Review | Video | Photos: The wounds of the past seem healed: Fleetwood Mac at the Hallenstadion 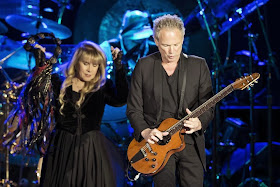 The wounds of the past seem healed: Fleetwood Mac at the Hallenstadion
by Stefan Künzli
Aargauer Zeitung

(Google Translation:)
The British-American band Fleetwood was in Zurich a live comeback with several lengths. The indoor stadium was completely gestuhlt with 7500 spectators and was almost sold out.

With "Second Hand News" was the legendary album "Rumours" opened in 1977, was now made the song also the start of the comeback concert in the Hallenstadion.

It started the nostalgic trip back to the pop and rock world of the 1970s and the memory of the greatest soap opera in pop history.

Because the song was guitarist Lindsey Buckingham addressed to his Elapsed time, singer Stevie Nicks, you had just been separated from him with a roar. "I will not miss you when you're gone," he sang for 36 years on and danced with her ​​a few songs engumschlugen later stage's songs, "Rumours", one of the most successful albums in pop history, but were only very thin thread of comeback concert.

Hits such as "Dreams" Nicks or "Go Your Own Way" by Buckingham were frenetically celebrated by the audience, but the songs of Christine McVie, the third major songwriter of the cult band missed. So the most important songs like "Oh Daddy," "Songbird" and "You Make Loving Fun." After her "Do not Stop" was played as an encore. Christine McVie had no desire to make a comeback. Quite in contrast to the two English founding members Mick Fleetwood (drums), her ex-husband John McVie (bass), as well as the two Americans Buckingham and Nicks, which are obviously having fun preparing to be back on stage together.

Especially Buckingham was highly motivated and shone with solo deposits.

Mick Fleetwood said in an interview with the "North West Switzerland» that «some songs only really sound good today."

He has not promised too much. But not because the band would have been better, but because it was over extended earlier.

Off the headlights had a keyboardist, guitarist, another support Buckinham, two backing singers made ​​for the full vocal harmonies and even hidden behind amplifiers grooving another drummer. Thus, the sounds in the Hallenstadion worked amazingly dense, compact and fresh. During the nearly two and a half hour show, although many of the hits were played, but the concert had on several lengths - especially for the lesser-known songs of the album "Tusk".

This follow-up album "Rumours" in 1979 was a commercial flop, has developed with its easy experimental bond over the years become a cult album for insiders.

"Let's celebrate Tusk," Buckingham said. But the audience wanted to hear at the Hallenstadion in the first place the songs from "Rumours".

So only came towards the end of the concert atmosphere, and real and "Go Your Own Way", the last piece before the encore, the audience raised from their seats. Nevertheless, Fleetwood Mac played not only the nostalgia card. With "Sad Angels" and "Without You," she also presented two pieces of their new, digitally released 4-song extra plate (EP) "Extended Play".

While "Without You", a previously unreleased number of Buckingham and Nicks, was recorded in 1974, "Sad Angels" is really new.

A rousing uptempo party number that leaves you wanting more. "We are working on new song material," Buckingham said.

Maybe it create Fleetwood Mac still, record a new album with new songs. The wounds of the past seem in any case healed in four.

NEVER GOING BACK AGAIN
RHIANNON
GO YOUR OWN WAY
WITHOUT YOU... (partial intro with Mick Fleetwood now in the mix plus the song)
DON'T STOP (Band intro included)