In the multi-purpose hall at the Ostbahnhof Fleetwood Mac played on Wednesday its greatest successes. Singer Stevie Nicks inspired by a tasteful selection of shawls and a chimney sweep costume.

Oldies but Goldies: That was again the theme as the Anglo-Californian soft rock-meets-blues group Fleetwood Mac completed on Wednesday in the multipurpose room at the Ostbahnhof for the third time in ten years a reunion concert for three hours to play Mick Fleetwood , John McVie, Lindsey Buckingham and Stevie Nicks through their repertoire, with emphasis, as always, was on the three albums "Fleetwood Mac", "Rumours" and "Tusk" from the second half of the seventies. 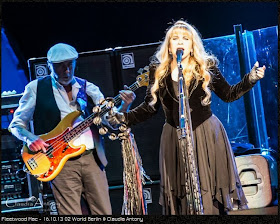 More than just pop nostalgia
(google translated)
Visibly aged, graying in honor, but on stage is still an event: Fleetwood Mac, the legendary band around singer Stevie Nicks, an energetic show has in their third concert in Germany on Wednesday evening delivered in Berlin. "Go Your Own Way" or "Do not Stop" unforgettable hits from the classic album "Rumours" (1977), formed the backbone of the two and a half hour concert in the nearly sold-out O2 World Ostbahnhof. But with newer songs Founded in 1967, the British-American quartet also proved that Fleetwood Mac are not only neat pop nostalgia. Besides frontwoman Nicks founding member Mick Fleetwood were on drums, bassist John McVie and guitarist Lindsey Buckingham on stage.
Source: Focus.de


REVIEW: Fleetwood Mac rattle again down her biography
In the Berlin O2 World Fleetwood Mac play only twelve evocative songs and bring their fans to sing along. Then Stevie Nicks remembers that they necessarily even have to tell the band's history.