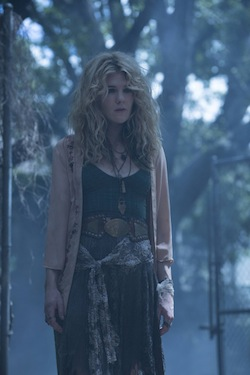 The second episode of Ryan Murphy and Brad Falchuk’s American Horror Story: Coven was chock-full of plot developments, including the resurrection of seemingly dead Misty (Lily Rabe) and Kyle (Evan Peters) and the reveal that modern-day Marie Laveau (Angela Bassett) has kept alive her minotaur lover! EW talked to Murphy about all the twists and turns as well as a preview of next week’s AHS: Coven.

ENTERTAINMENT WEEKLY:  I love that Misty is a big Stevie Nicks groupie.

You actually asked Stevie to use her music on the show, right?

Yeah, the whole thing started with the fact that when I was growing up, I was always obsessed with those Stevie Nicks songs like “Riannon” and “Gypsy.” And I remember reading an article where Courtney Love called Stevie Nicks the “white witch” and Grace Slick the “dark witch.” And I have a good relationship with Stevie because of Glee. She is one of the few artists that have come to hang out. She had been writing Lea [Michele] and I regularly since the Cory [Monteith] situation, because she really loved Cory [who passed away in July]. So she’s just a wonderful, wonderful person.

When we got to this witch idea, I thought, if you’re Misty and you have grown up alone and you don’t know any other witches, there’s one witch you probably would know and that’s Stevie Nicks. So I called Stevie Nicks and first I said, “I want to use you in the show.” But she was very resistant because from the beginning of her career people who are in the Wiccan community had given her a hard time thinking she was a witch and she got a lot of scary fan letters. She didn’t like the darkness of that, and I explained to her the part and she’s like, “Aw f—, let’s just do it. OK, I love it.” She’s not a witch, but she has an attraction to those mystical creatures because they’re fun to write about. So she gave me the rights to her music and she and Lindsey Buckingham are working on a special sort of redo of a song they did about a witch.

Check out the full Q&A at Entertainment Weekly
Nickslive at Thursday, October 17, 2013
Share